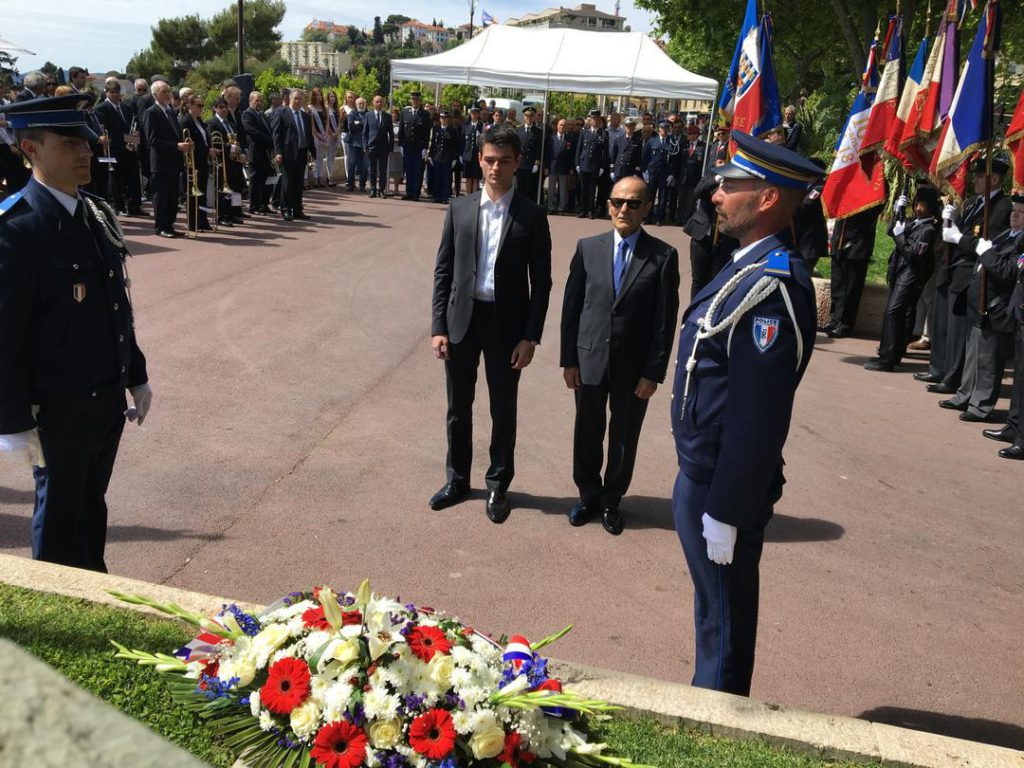 The image I have of my Grand-father has always been the same, that of a hero, therefore a role model

Robin Evans is the grandson of Pascal Vallicioni who was a prisoner in the Neuengamme concentration camp (number 43778, satellite camp Wilhelmshaven). Pascal survived deportation and is now 90 years old.. Robin is 19 years old.

Remembrance Day for the Deportation in Grasse (France), April 30, 2017 – Robin and his grandfather have just placed a wreath in front of the Memorial for the Deportees. © P. Evans, 2017

Robin, can you tell us when and how you learnt about your grand-father having been a prisoner in a concentration camp?

I don’t remember a particular declaration. As a matter of fact, I feel as if I grew up with the knowledge of my grand-father having taken part in World War II. As I was getting older, I gradually understood which part he had played, what kind of war it had been, learned about its actors, its causes, what had been at stake and what deportation had meant. Nevertheless, I learned about the reality of deportation later on, through history, literature (particularly by Primo Levi) and by discussing it with my grand-father – but it has always been a gradual learning.

„My grand-father and my mother delivered details about his deportation progressively, according to my state of maturity.“

Today, my grand-father provides me with details about his everyday life as a deported person and I just begin to understand this condition as a whole.

What was your reaction to your grandfather’s story?

While gradually gaining an understanding of what “being a deported person” meant, I began asking myself questions: how can one survive in such conditions? and even why does one want to survive?

„I wanted to understand how my grand-father and all the others had managed to cling to life, whether they were thinking about it or even thinking about anything at all.“

This gradual learning brought me back to the question of our humanity, wondering – with a mixed feeling of curiosity and horror – what it is due to and depends on.

In what way and to what extent did your grand-father’s story have an impact on you as a student, on your own attitude towards History and particularly the history of WWII?

Before it had an impact on my studies, my grand-father’s story had an impact on me, in a certain way it built me up. As I said, I grew up with that story, and although it was slightly blurred in the beginning, the image I have of my grand-father has always been the same, that of a hero, therefore a role model. His story certainly had an influence on my studies, because I started being deeply interested in History and more generally in human sciences.

„Whether in history, where a factual truth lies (at least when the conflict of memories comes to an end), or in philosophy which I consider to be the quintessence of our humanity, and especially political philosophy. His story implies getting deeply interested in History, in order to understand the phenomenon. It brings you to study the Second World War and then History.“

I finally opted for studying law with an ideal of Justice and mainly to understand the mechanisms aiming to ensure individual rights so that such deeds as were perpetrated during the „Third Reich“ come to an end. My grand-father’s story has endowed me with a deep humanism and therefore had an influence on my studies and on my life as a whole.

Pèlerinage der Amicale française de Neuengamme, May 26, 2017 – Robin and his grandfather standing where the entrance of the former satellite camp Wilhelmshaven used to be. © J. Gicquel.

Did you discuss your grand-father’s story with other people (your parents, friends, etc.) and if so (or if not), for what reasons?

I discussed it with my parents. Mainly with my mother who has sensitized me to deportation since I was a child. But it is interesting, as well as frustrating, to see that other persons with whom I had short conversations don’t know anything about deportation and are absolutely not receptive to what it means.

„It is due to our school curricula where, from the beginning, deportation is seen as the genocide of the Jews, without considering all its other aspects.“

What are your feelings towards the present day German people as a whole and how do you react to the children of Nazi perpetrators?

I don’t blame the German people nor the perpetrators’ descendants. That would be unfair. Even more, to assign somebody’s crime to his descendants is nonsense for me. On the other hand, I feel ambivalent, even now, concerning “German people of that period”. Of course, I bear a grudge against German people of that time, particularly those who took an active part in the regime. Yet, we are speaking of totally indoctrinated people who, even if they vaguely knew what was going on in the camps, have never set eyes on the reality of deportation. But I always feel angry with those who knew about this reality and even more with those who took an active part in it.

What are the reasons for your involvement with the French Amicale de Neuengamme? Why did you take part in the pilgrimage this year? What was your feeling at the end of it ?

First of all, I got involved to show my grand-father that I wanted to support Memory culture. The next step was to try and sensitize more people to deportation without resorting to great humanistic speeches but simply by sticking to meaningful historical truth. In the same way,

„I take part in this pilgrimage for my grand-father’s sake.“

Robin standing next to the monument for the former satellite camp Wilhelmshaven. © Jacques Sarête, 2017.

I benefitted greatly from the pilgrimage to Neuengamme. First of all, I could witness my grand-father’s complete testimony; I could see him walking about in the very remains of Neuengamme and the satellite camps we went to. Through this oral and visual contact I became really aware of what deportation was, instead of seeing it as a set of historical facts, numbers and small bits of accounts.

„In those very places, I felt invaded with seriousness and a certain sadness which I had never known before. I feel wiser now and my intention is to act in such a way that my grand-father’s story and that of millions of other victims are never forgotten.“

“The image I have of my grand-father has always been the same, that of a hero, therefore a role model.” was last modified: November 2nd, 2017 by Yvonne Cossu-Alba
0 comment