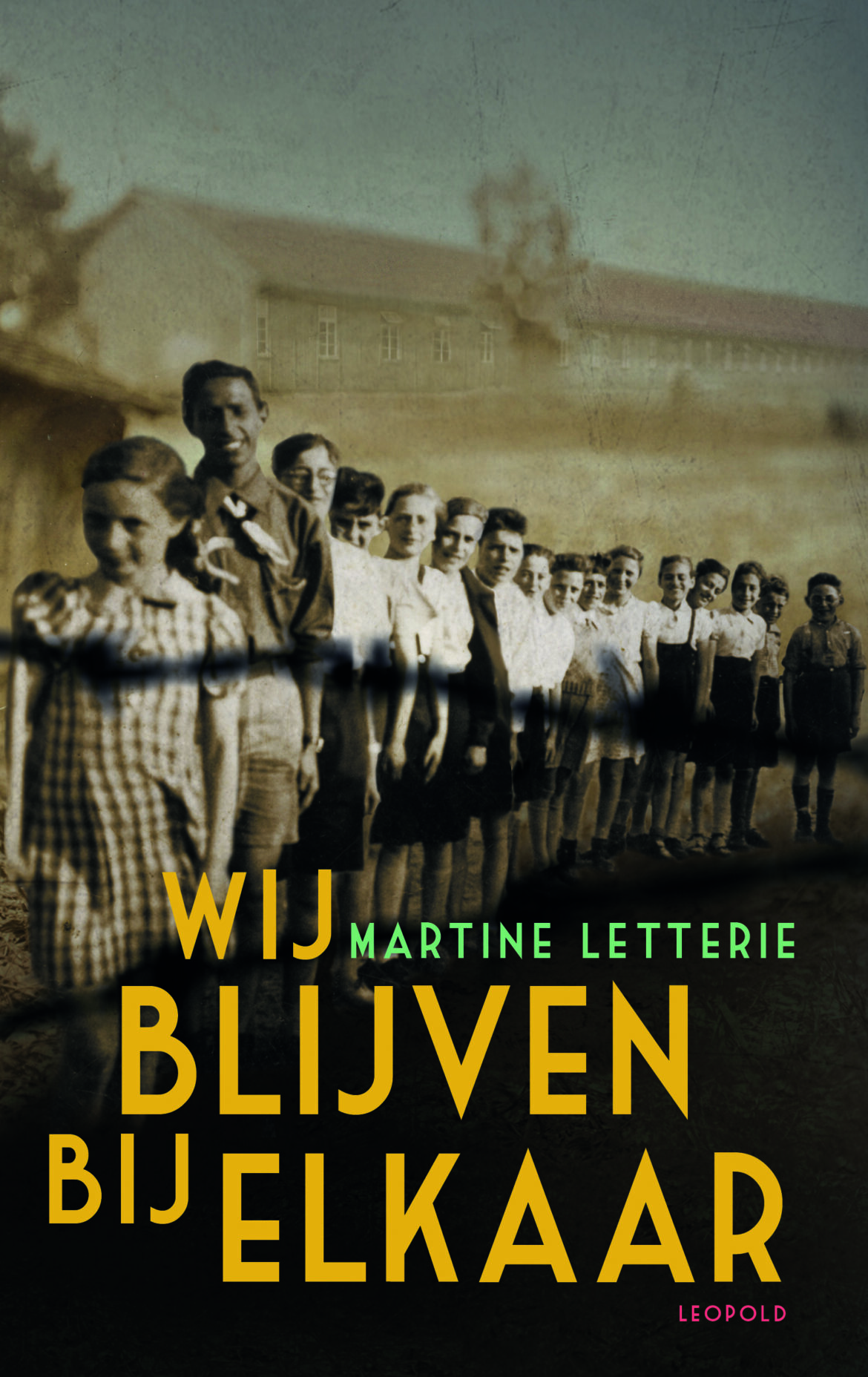 In 1939 the German-Jewish Birnbaum family ended up at Camp Westerbork in the East of the Netherlands, near the German border. Father and Mother Birnbaum cared for German-Jewish children who arrived at this then refugee camp without their parents. In this way an orphanage barrack was created, where the family tried to make life bearable for the children. Their own six children also helped. It was tough going, but they still had each other!

After the start of the Second World War, the family was deported to the Bergen-Belsen death camp in Nazi Germany. Again, the Birnbaums took it upon themselves to care for the orphans, under the motto: We must stick together!

Martine Letterie travelled to Jerusalem to meet the Birnbaum children (who are now quite old) so she could relate their eyewitness accounts of the Holocaust.

The following passage is an excerpt from the book “We must stick together” by Martine Letterie, published by Leopold in 2020. The English translation is by Lorraine T. Miller.

The moment Suzi wakes up, she knows: today is her tenth birthday. But she doesn’t open her eyes right away. So long as she keeps them tightly shut, the day will at least begin festively. After all, it’s an important birthday, because she’s no longer a kid. She’s almost a teenager. Her body tingles with a kind of cheerful excitement, even though she realizes it’s nonsense. Here, it’s not her birthday. In the camp there are no birthday celebrations. At least she never saw any. When it was Zwi’s birthday in April, they were still in the quarantine barrack and she was terribly ill. She can’t remember if Zwi got any presents then, but she doesn’t think so.

The thumping and talking around her increases in volume. As she sits up, Gina accidentally brushes Suzi’s shoulder with her foot. Then she whispers to Sonni and suddenly there’s a lot of activity. A nose rubs against each of Suzi’s cheeks, followed by kisses. “Happy Birthday!” sounds in both her ears. When she finally opens her eyes, she is greeted by the smiling faces of her two older sisters. Before she even sits up, Sonni and Gina start singing, and from the opposite bunk her brothers Zwi and Sampi join in. Their mom lowers herself down from the top bunk and plants a loud kiss on Suzi’s cheek.
“Ten years! How did you get so big?! Let’s hope we’ll celebrate your next birthday in freedom.” “With cake,” says Sampi. “And presents,” adds Zwi.
The tingling in Suzi’s body has turned into a warm glow. It’s a happy birthday, even without presents.

Their mom’s friend Adi appears beside the bunk.
“Is someone here having a birthday?” Her brown eyes sparkle.
“Best wishes, Suzi. Your tenth birthday, that’s quite a milestone.”
Adi nods at Suzi in such a special way that Suzi’s heart skips a beat. Is it possible…?
“That’s why…” Adi continues, “I’ve brought you a little something.” A hand appears from behind her back, which she brings in Suzi’s direction.
“For you.”
It’s a narrow hairband, decorated with colorful leather flowers. Suzi carefully picks up the present.
“It’s lovely.”
“Adi, my goodness!” her mom says. “Did you make it yourself?” Her friend nods. “Yes, in the workshop.”
Mom puts an arm around her dear friend, kisses her on the cheek, and then looks at Suzi. “I’m sure you understand how dangerous it was for Adi to make this and smuggle it out.” Suzi is at a loss for words, so she just nods. Of course, she knows. She’s afraid to think about what might have happened if a guard had caught Adi. A shiver runs down her spine. “Thank you, Adi,” she murmurs.
Adi strokes Suzi’s head.
“I hope this hairband reminds you that there’s life outside the camp. For us, as well. We mustn’t give up hope!”

When it’s time for roll call, Suzi goes outside with her sisters. She momentarily closes her eyes because of the glaring sun. Inside the barrack it was dark; outside the light is reflecting in the large rain puddles.
“Perfect birthday weather,” Sonni says as she pulls Suzi against her for a second. Suzi pauses and closes her eyes again to take in the sun’s warmth.
“Wonderful! Who could have imagined this yesterday?”
Sonni gives her a gentle push.
“And now hurry up, roll call!”
Before Suzi takes her place, her dad comes and gives her a kiss.
“Happy birthday, my child. Next year we’ll celebrate your birthday in Jerusalem.” His confident eyes are so bright, she almost forgets how thin he is. When the Birnbaum family was removed from the Palestine List, her dad was reassigned to the tree stump commando. That means digging up tree trunks in the forest. He doesn’t say much about it, but it must be very hard, exhausting work.

Before her brother Yakov gets to wish her a happy birthday, an SS officer starts shouting that the count is about to begin. But even that can’t spoil Suzi’s mood. Roll calls last for hours on end. Suzi tries to stand as still as possible, all the time thinking of her hairband with its beautiful flowers. Suddenly she is reminded of her friend Loes’ Flower Quartet card game. Loes keeps it under her mattress and doesn’t take it out very often. At least not for playing. Loes told her she looks at the pictures every night before going to sleep.
“I’m afraid I’ll lose a card, or one will get damaged,” she says each time Suzi asks. “On your birthday we’ll play a few rounds,” Loes promised her earlier in the week. Actually, Suzi doesn’t remember how the game goes, it’s been so long since she played it. What do the cards look like? She tries to visualize the images in her mind but can’t. When was the last time she saw a real flower? She can’t remember that either.

“The soup’s ready!”
Suzi looks up from the Tic-tac-toe game that Loes and she are playing with a stick in the mud. Two women toting a large pan between them come through the fence. They’re both somewhat hunched over, that’s how heavy the pan is. You can see that it’s hard for the women to keep the soup from spilling over, because they’re taking careful, small steps. Soup. Suzi’s belly aches from hunger. Though she knows it won’t be filling enough, she still hurries back to the barrack. A long line quickly forms, even before the women with the soup pan have come inside. Suzi weaves her way through the crowd to reach her bunk, where she must first retrieve her spoon and mug. She stumbles over a leg and falls against an elderly woman.
“Hey, simmer down! We’re all hungry!”
Before Suzi can even respond, the woman has disappeared in the direction of the line. “Here!” Gina meets Suzi and hands her a spoon and the red enamel mug she uses as a bowl.

They go to join the line, which is even longer by now. Sonni is somewhere in the middle. She gestures.
“Here, Suzi! I saved you the spot in front of me!”
But before Suzi can get on line with her sister, someone grabs her hard by the arm. To what does she owe this? Loes’ mother shoves Suzi towards the end of the line, where Gina is standing in front of her mom, Zwi, Sampi and Yakov.
“It’s her tenth birthday!” Gina says crossly.
But it doesn’t help. Suzi must wait her turn like everyone else.
“Don’t worry,” Gina whispers in her ear. “What’s at the bottom of the pan is always the best.”
Together they slowly shuffle forward until they can see the pan. The barracks leader is standing beside it, watching as the soup is handed out. She’s holding a stick, which she threateningly slaps against her hand. The message is more than clear. Whoever pushes or cuts ahead, gets a thrashing.
“It’s her birthday,” Gina tells the woman who takes Suzi’s mug to fill it. The woman raises her eyebrows and laughs.
“I can’t tell you how many times it’s someone’s birthday here.”
What nerve, as if Gina would lie! Suzi throws the woman a stern look.
“I’m turning ten today and that only happens once!”
A hint of a smile crosses the woman’s face as she scrapes the ladle over the bottom of the pan.
“Here you go, birthday girl.” She returns the mug to Suzi and there’s even a piece of cabbage floating in the greenish-brown water.
“Thank you.” Suzi carefully goes to the table where Sonni has already found a seat.

Their mom has a rule that whenever they can the Birnbaums eat together. This is also possible because they always try to stand in line with each other. As logical as that might sound, not everyone does this. Some people just gulp down their soup standing.
“I wanted to give you a place in line for your birthday,” Sonni says apologizing to Suzi. “Thank you!” So sweet of everyone to think up a way to celebrate Suzi’s birthday. Before she eats her first spoonful, her mom repeats what she always says, “Eat slowly, so you can enjoy it longer.”
Heeding her mom’s words, Suzi slowly eats her soup, relishing every spoonful. Yet, it’s finished before she knows it. Then she glances at her mom, to see if she’s ready to recite the blessing after the meal. Instead her mom says something completely different.

“Before we give thanks, I want you to come with me.” She smiles so mysteriously that Suzi’s heart once again skips a beat. She mustn’t get up her hopes… Her mom can’t possibly have anything for her… She can’t…
Sampi runs ahead with Suzi following close behind. When they get to the bunk, she anxiously waits while their mom climbs to the top and returns with a cup and a small spoon. “Look,” says their mom, her eyes first falling on Suzi and then her brothers and sisters.
“There’s pudding in this cup, which I made with a bit of milk especially for Suzi’s birthday. You all get a tiny taste, but Suzi goes first.”
Suzi closes her eyes and lets the pudding melt on her tongue. She has never tasted anything so delicious.
Sonni is the first to start singing: “Happy birthday to you, happy birthday to you!”
Suddenly Suzi realizes that this morning she was mistaken; it’s your birthday no matter where you are.

Excerpt: We must stick together was last modified: May 11th, 2021 by Martine Letterie
0 comment

Announcement: Commemoration of the Victims of the Bombing of Lübeck Bay and of the End of the War and the Liberation of the Concentration Camps