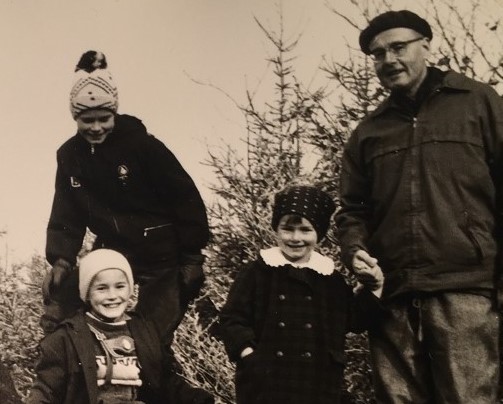 My father, Dr. Karl Otto Watzinger, was born in 1913. He grew up with two siblings in an educated middle-class family in Tübingen. His father, Carl Watzinger, was a professor of archaeology, his mother had no professional training, enjoyed literature and theatre and was a great admirer of Goethe.

My father wasn’t very keen on Goethe. He was interested in the social and political situation in the Weimar Republic. Foreign Minister Stresemann was highly valued by him because of his conviction that politics is based on negotiations.

In 1933 he left what he called the “professor’s nest” in Tübingen for Berlin and studied law as the basis for his later political activity. He was arrested in 1939 and sentenced to two years imprisonment for high treason for lecturing on the domestic political situation in Germany to exiled members of the SAP (Socialist Workers’ Party) in Switzerland and an essay in the exile magazine “Maß und Wert” in which he critically examined Nazi policies.

“Deprived of all rights”

Directly after his release from prison, he was taken to Dachau concentration camp in 1941, where he spent three years as a political prisoner. He worked in the clothing chamber. In the concentration camp he found three friends for life. In autumn 1944 he and many other political prisoners accepted the offer to “prove themselves” on the Eastern Front. He was sent to Hungary with the SS-Division Dirlewanger, where he defected at the first opportunity and was taken into Russian captivity.

He did not like to talk about his concentration camp experiences. I remember two sentences: “Others, the racially persecuted, were much worse off” and “I experienced what it means to be completely deprived of rights”. I only learned details about the concentration camp period later, including from the biography of his concentration camp friend Friedl Volgger. After his return home in 1945 my father had a severe depression, which was treated with electric shocks, among other things. Afterwards he was able to complete his dissertation and his legal clerkship, which he had not wanted to take up under the unjust Nazi regime.

My parents married in 1954 and in the same year they moved from Ulm to Mannheim, where my father took up a new position as legal advisor of the city of Mannheim and later as mayor for law and personnel.

I, Jörg Watzinger, was born in 1955. My brother Ulrich is three and my sister Doris six years younger than me. I always had the feeling that in the time after my birth I must have had an experience of abandonment and deep despair. An experience that I do not get the most important things anyway. Through a family constellation that I did with Diana Drexler (WISL) a plausible connection with my father’s concentration camp time could be established.

As a survivor he felt that he still had so much to do for his people, the dead. There was a great, unlived grief. He was so emotionally wrapped up in this story that he was emotionally unreachable to me. After I was born, my father went into a deep depression. He became unable to work and was in psychiatric treatment for several weeks. Afterwards he could pursue his profession with great commitment. Only after retirement did he have to undergo clinical treatment for depression twice more. During these phases, fearful memories of the time of persecution and concentration camp imprisonment came to the surface.

For me it is important that the Dachau Concentration Camp Memorial exists. That I can visit the real place where my father was imprisoned for three years “completely deprived of all rights” and that I can get information there about the reality in the concentration camp. For me it is also a place of societal recognition that this time has existed.

I read the letters and documents in the family archive about my mother’s brother, who, at the age of 21, had been reported missing as a soldier in Stalingrad since January 1943. He was very close to my mother, so that she named me Jörg Dietrich after him.

In the exchange with my siblings as well as with my family, my father’s concentration camp imprisonment is present and we talk about it when it arises. I have been living with my family in Schwetzingen for 20 years. Our two sons are in training and studying.

There is no commemoration in a ritual sense in our family. In the memory of my father, the focus lies rather on his commitment to a democratic Germany, to respectful interaction with one another regardless of status and heritage, and to educational opportunities for all. He offered guided tours of the Jewish cemetery in Mannheim until old age, and in his retirement he published two books on the history of the Jews in Mannheim.

My father was a member and at times chairman of the Society for Christian-Jewish Cooperation in Mannheim for many years. In its mourning announcement for my father’s death, the Jewish community of Mannheim wrote: “We have lost a reliable friend”.

After the biographical exploration, I began to read up on the concentration camp and Nazi history at the suggestion of the Dachau psychologist Dr. Müller-Hohagen. Then started the exchange with other descendants, which means a lot to me. It is something different to read about the fates of those persecuted by the Nazis or to sit at a table with people who tell their story. It is a piece of belonging and arriving. Another positive effect is that one’s own history and how one deals with it becomes clearer and more differentiated in comparison with the stories of others.

After the phase of biographical and historical clarification, the topic “transgenerational traumatisation” is now in the foreground for me. Questions such as, what psychological consequences did the concentration camp imprisonment have for my father and what consequences did it have for me? The exchange with others about these questions, what therapeutic options are available and what helped the individual can provide important suggestions.

In the summer of 2016 I visited the daughter of my concentration camp friend Friedl Volgger, with whom my father remained a friend all his life. We had a very open exchange. In April 2017 I took part in an initiative meeting in Nuremberg. We were eight descendants of Nazi persecutees. This group will meet again in October 2017 in Munich. In May 2017 I took part in the Forum “Future of Remembrance” at the Neuengamme Concentration Camp Memorial. In September I participated in the regional meeting of the Association for Information and Consultation for Persecutees of National Socialism in Cologne. A first meeting is planned for April 2018 for descendants whose ancestors were imprisoned in Dachau concentration camp.

It is good to deal biographically/historically with the history of your own family during the Nazi period. How did the individual relatives behave under the pressure of the dictatorship? What losses did they suffer? How did they deal with their past? In the course of this exploration, my view has broadened from my starting point of political persecution to the further consequences of Nazi politics such as racial persecution, black pedagogy, war, forced labour, flight and expulsion.

It is good to start an exchange with other descendants, going beyond the individual biographical history.