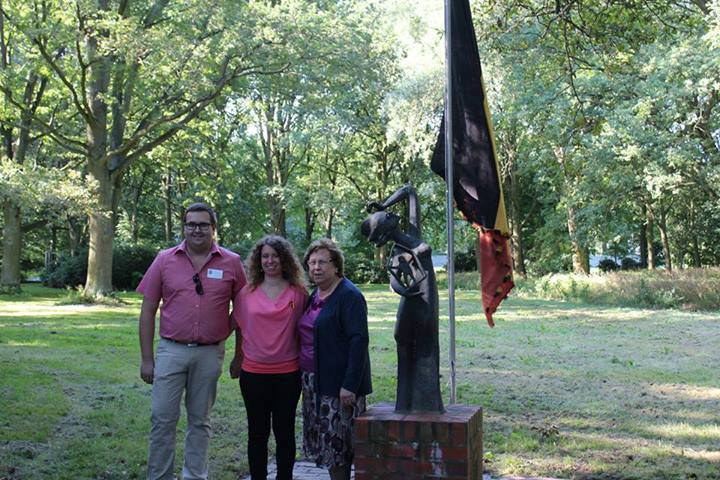 Tom Devos has a good friend. Together, they are active in an organization. They have even gone on group trips abroad. Nothing unusual, you say. But when Tom is invited at age fifteen by his friend to get involved in the organization, his friend is already well over 60 years old. For Tom, the shared interest in the history of the village Meensel-Kiezegem is more important than the age difference. The Stichting Meensel-Kiezegem ’44 is committed to ensuring that the violent crimes of the Nazis are not repeated and that the victims of the „punitive actions“ committed by the Nazis against the village Meensel-Kiezegem will be remembered. Tom’s great-grandfather Evrard Cauwbergs was one of the 71 men who were deported to the Neuengamme concentration camp after the two raids in August 1944. Evrard Cauwbergs died on November 7, 1944 in the Neuengamme concentration camp.

In 2000, Tom’s grandmother Leona wanted to visit her father’s final resting place for the first time. Yet, she lacked the strength to begin this journey alone. Thus, Tom went with her. He thinks that in, in retrospect, the sight of his grandmother placing flowers for her father next to the statue „The Desperation of Meensel-Kiezegem“ led him to the decision that he would want to learn „as much as possible about these places, what happened there, and about the history of my great-grandfather Evrard“.

We want to empower young and old people in Europe to acquire critical and independent thinking skills so that they can find their way through the maze of modern society.

The educational work of the Stichting is all about the lessons of history and the stories of Nazi victims from Meensel-Kiezegem which are exhibited in the Hageland Peace Museum. Members of the Stichting give guided tours for children, adolescents and adults in the museum. Nonetheless, the educational work does not stop at the borders of the municipality of Tielt-Winge. Rather, a traveling exhibit brings the history of Meensel-Kiezegem to other parts of Belgium and to Germany. In Hamburg, Tom says, the Stichting Meensel-Kiezegem ’44 is even better known than in Belgium. For this Tom feels particularly grateful to the staff of the Neuengamme Concentration Camp Memorial.

Our relationship is more than cordial. We have been working together for so long that we have all become good friends.

The nature of the annual trips to Northern Germany has changed since Tom’s first visit with his grandmother when he was 12 years old. Originally, they were more like pilgrimages. Back then the participants took a very emotional approach to history. They had missed their fathers their entire lives. For the younger generations the visits to the Neuengamme Concentration Camp Memorial are not just about emotions, but also about finding out more about their relatives.

Although there’s no strict allocation of tasks in the Stichting Meensel-Kiezegem ‘44, Tom is mainly in charge of the organization’s editorial activities. He runs the blog and ensures that new reference material and the newsletter are published. Tom’s professional experiences in the digital world are especially valuable for the Stichting’s new project. The idea is to give interested individuals a chance to inform themselves online about the events in Meensel-Kiezegem during World War II.

Ultimately, Tom’s wishes to build a larger memorial on the grounds of the Church of Meensel. His plan is to build an interactive museum in which future generations can explore the history of World War II and Meensel-Kiezegem. There they can learn from historical exhibits and make use of the reference material the Stichting has accumulated over the years.

When Tom is asked where he gets the energy from to invest so much of his free time in the Stichting Meensel-Kiezegem ’44, he offers a simple answer:

It’s something that I need to do. This history is a part of me. It’s my job to spread these stories. […] I want to understand […] I see the future of the Stichting as an organization in which the fifth, sixth and seventh generation experience something new. To get to know how good the world is we live in today, but also how fragile it is, and that freedom is not an acquired good, but something we have to keep fighting for.