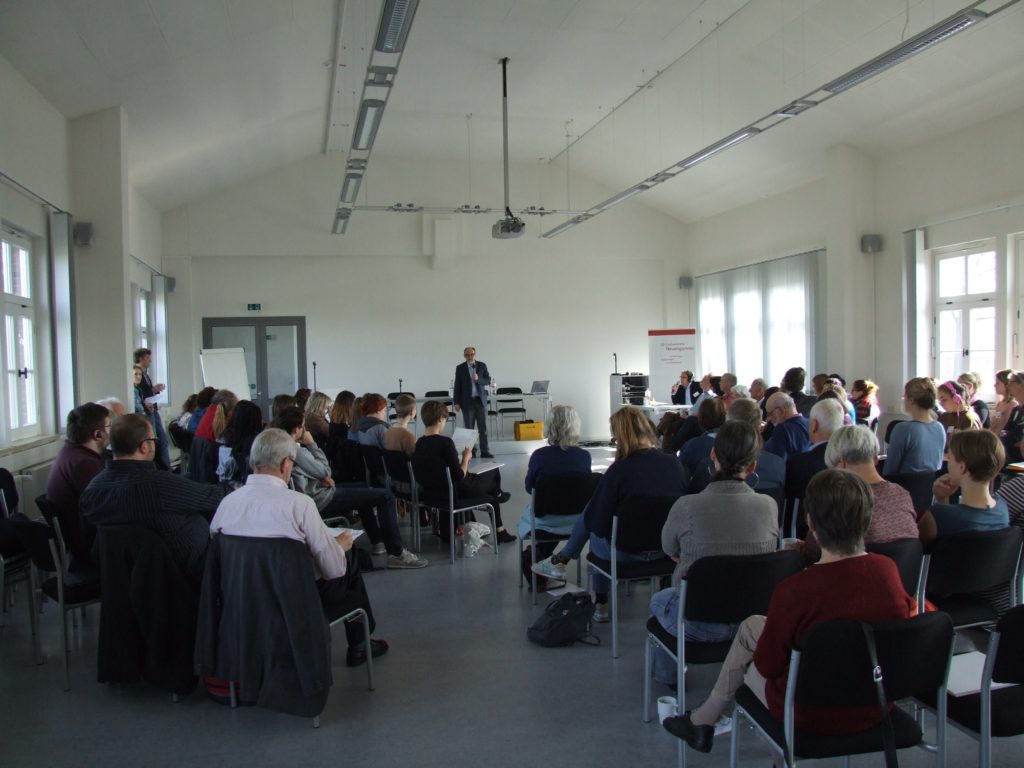 The third annual Forum “Future of Remembrance” was held by the Neuengamme Concentration Camp Memorial on May 1 and May 2, 2017. 65 participants were in attendance from several European countries including Belgium, Germany, France, the Netherlands, Poland, Slovenia and Russia. Among them were descendants of victims of Nazi persecution, descendants of Nazi perpetrators, representatives of institutions concerned with remembering and researching Nazi crimes as well as young adults from Hamburg and other interested individuals.

The current worldwide spread of racism, discrimination and xenophobia shaped the Forum’s focus of strengthening remembrance efforts and cooperation across borders. In his opening remarks, Detlef Garbe, the director of the Neuengamme Concentration Camp Memorial, urged participants to stand together against the resurgence of nationalism and far-right parties. He noted how inflammatory right wing remarks could be made in public without repercussions such as those recently made regarding the Berlin Holocaust Memorial and the Allied bombing of Dresden.

Report from the Meeting of Descendants

For the descendants of Nazi victims, the current political developments ring especially close to home. Twenty-two descendants of Nazi victims met the day prior to the Forum to network and discuss the continuing personal effects of their family members’ persecution. Yvonne Cossu-Alba and Uta Kühl, both daughters of resistance fighters who were imprisoned at the Neuengamme Concentration Camp, presented a summary of this meeting to the Forum’s participants.

Uta Kühl (left) and Yvonne Cossu-Alba presenting the results of the Meeting of Descendants. © KZ-Gedenkstätte Neuengamme.

They highlighted that organizations for survivors and descendants of former prisoners play an important role in intervening in situations where current interests, for example, infrastructure projects, threaten to trump the honoring of those who suffered at the Neuengamme Concentration Camp. Cossu-Alba and Kühl acknowledged that despite the good work done by various national organizations and the umbrella organization Amicale Internationale KZ Neuengamme, increased efforts are needed to include more descendants. The participants concluded that a reform of the current system or the creation of a totally new organization is required to include all relatives of former prisoners, regardless of country of origin or reason for persecution. In this context they additionally highlighted that the different generations of descendants have a diverse group of interests and needs. Whereas the second generation seems to be most interested in what their relatives experienced, the third and fourth generations want to know what life was like during the war in order to grasp the “bigger picture.”

Panel Discussion: Why do descendants write about their family history?

The following panel discussion between three descendants who authored books about their family history indirectly highlighted the different approaches taken by the second and third generation.

While Jean-Michel Gaussot had always wanted to write a book about his father, he did not carry out the idea until after his mother’s death. Among her belongings he found letters from his father’s camp comrades as well as his mother’s diaries that contained her thoughts, fears, and hopes following her husband’s arrest. While the main goal of Jean-Michel’s book is to pay tribute to his father and explain the presence that this unknown man had in his life, it also gives intimate insights into Gaussot’s childhood and adolescence.

Erald de Wachter only grew interested in his father’s story when he was close to retirement. Among the triggers that led him to start his research was a friend’s suggestion to write a book about his father. His book focuses not only on his father’s experience but also the men who had fought with him as they were not well-known.

For Martine Letterie, writing about her grandfather also meant writing about her father, who was only nine years old when his father was arrested. She has written both a children’s book as well as a book for adults about her family history. The children’s book is centered around Martine’s father’s perspective. However, due to his silence, Martine had to imagine and essentially recreate her father’s character’s feelings. After the publication of the book, her father confirmed that her writing accurately represented his feelings.

A main focus of the Forum is increasing the current generation’s involvement. As more survivors pass away, the future of preserving both the history of the Neuengamme Concentration Camp and the Nazi crimes in general lies with young people.  Therefore, the Neuengamme Concentration Camp Memorial regularly organizes youth projects to get students involved in the remembrance process. The 2017 project “Raising Voices, Keeping Voices” was comprised of four different radio programs that concentrated on the comparison between resistance movements against Nazism and current resistance movements against the far right. The nine participants between ages 16-21 came from Germany, Russia and the United States. In their radio pieces, they looked at the role of music in politically mobilizing young people, the idolization of Graf von Stauffenberg and the differences between passive and active resistance as well as violent and non-violent resistance.

Workshops on “Engagement against Far-Right Populism, Racism, and Group Based Inhumanity”

The youth project’s themes were taken up by small workshops. In these workshops, participants engaged in lively discussions about lessons from Nazi resistance, enablers and  obstacles for resisting, freedom of speech and its limits, and how the remembrance of different forms of resistance is dictated by politics.

On the 72nd anniversary of the end of the war and the liberation of the camps, many participants fear that commemorating the Nazi victims has and will continue to become less and less important in society. As a result, this year’s Forum additionally focused on new forms of remembrance.

Tom Devos from N.C.P.G.R. – Meensel-Kiezegem ’44 gave an overview of the Herdenkingsweek or Week of Remembrance that his organization carried out in August 2016. This event marked the anniversary of the 1944 raid in his small Belgian village that resulted in the deportation of 70 people to the Neuengamme Concentration Camp. The organization decided to have a week-long event in order to attract more visitors with different “entertaining events” such as an Old Timer Show.

While the intention of the Herdenkingsweek is to attract those who aren’t usually involved with commemoration activities, the blog “Reflections on Family History Affected by Nazi Crimes” gives those who are already involved with memory culture a platform to exchange information. For the past two years, the blog has been under the administration of Swenja Granzow-Rauwald and allows participants to share their personal perspectives, introduce new projects and share information.

Granzow-Rauwald stressed that the blog is unique in giving descendants of both victims and Nazi perpetrators the opportunity to publicly share how their family history has affected their lives.  Currently, the blog offers articles in German, English, Dutch, French, Polish and Spanish. Although the mission statement has been translated into Russian, there haven’t been any Russian contributions. While Granzow-Rauwald is satisfied with the 23,000 site visits that the blog has received, she plans to increase its popularity by advertising through social media.

The importance of utilizing the internet for new forms of remembrance was highlighted by Martine Letterie’s presentation on the Dutch Vriendenkring Neuengaame’s Digitaal Monument. Through this monument, visitors can find information on every Dutch prisoner of the Neuengamme Concentration Camp. In addition to basic information on each individual, family members can upload pictures or written documents to provide more insight into the person’s life.

Bernhard Esser, the son of the German resistance fighter Rudolf Esser, and Barbara Hartje, the president of the German Friends of the Neuengamme Concentration Camp Memorial, presented the new project for a “Place of Connectedness for Descendants.” The project’s working group envisions the creation of an online database and platform similar to the Dutch Digitaal Monument, in which all prisoners are accounted for regardless of their country of origin. They also wish to create a physical monument where a commemorative plaque can be attached to memorialize any former prisoner of the Neuengamme Concentration Camp. The working group plans to organize a design contest with the University of Fine Arts in Hamburg to pick a design for the future monument.

During last year’s Forum, participants expressed an interest in connecting with representatives of transition camps whose prisoners were eventually sent to the Neuengamme Concentration Camp. Representatives from institutions in Belgium, Denmark, France and the Netherlands were invited to take part in the Forum and share their work. Carla Huismann from the National Memorial Kamp Amersfoort in the Netherlands and Oktaaf Duerinckx from the Memorial at Fort Breendonk in Belgium attended the Forum. Olga Kolichenko additionally joined the panelists as a representative of the Center for Oral History in Varonezh, a Russian research center that studies the history of slave laborers and their descendants.

Carla Huismann gave a short overview of the history of Kamp Amersfoort and the memorial’s plans for expansion. Currently, many school groups visit the memorial. Lectures, book presentations and other educational projects are also offered. One of the memorial’s new goals is to increase communication with descendants of former prisoners. The memorial will hold a commemoration march in October 2017 in which participants will follow the former prisoners’ route from the main train station to the camp site.

During his presentation on the Fort Breendonk camp memorial, Oktaaf Duerinckx described the terrible conditions that prisoners endured. While the museum is frequented by many school classes, it offers no special programs for descendants. It was emphasized that the museum is still administered by the Belgian Minister of Defense.

Olga Kolichenko from the Regional Center for Oral History in Voronezh gave an overview of the projects run by the center and their approach in combining seminars, practical work and workshops. She emphasized the growing interest of people in volunteering with the center and the possibility of creating online volunteering opportunities.

All panelists expressed enthusiasm in closer cooperation, yet no specific ideas were solidified.

Plans for next year

Dr. Oliver von Wrochem, the deputy director of the Neuengamme Concentration Camp Memorial, and Swenja Granzow-Rauwald were responsible for the Forum’s organization. They ended the conference with a presentation of possible topics for the 2018 Forum.

Both reasserted that the aim remains to strengthen cooperation between people from different countries. One future topic of interest could be collaboration of those that were under Nazi occupation in countries such as France and the Netherlands. They also raised the option of broadening the perspective to include non-European countries in order to take into account what made World War II truly global.

Interests of descendants of victims

Granzow-Rauwald emphasized that the descendants of the victims should fight for recognition of their interests. The audience agreed that the descendant’s issues of concern needed to receive more public attention. Granzow-Rauwald proposed that the addition of more stories to the Reflection Blog would demonstrate how important descendant voices are in collective remembrance efforts.  She conceded that for this goal to be met, more volunteer translators would be needed.

Forum participants stated that they hoped the future Forums would include more insight from those with immigrant backgrounds, especially young people. Planning for the next Forum “Future of Remembrance” will start this fall. Ideas can be sent to info@rfhabnc.org.

Standing together: The Forum “Future of Remembrance” 2017 was last modified: November 18th, 2020 by Alexandra Cain
0 comment

Behind every name a story

How shall we proceed after the Forum...

Ideas for making the names of survivors...

The story of Wim Aloserij travels the...