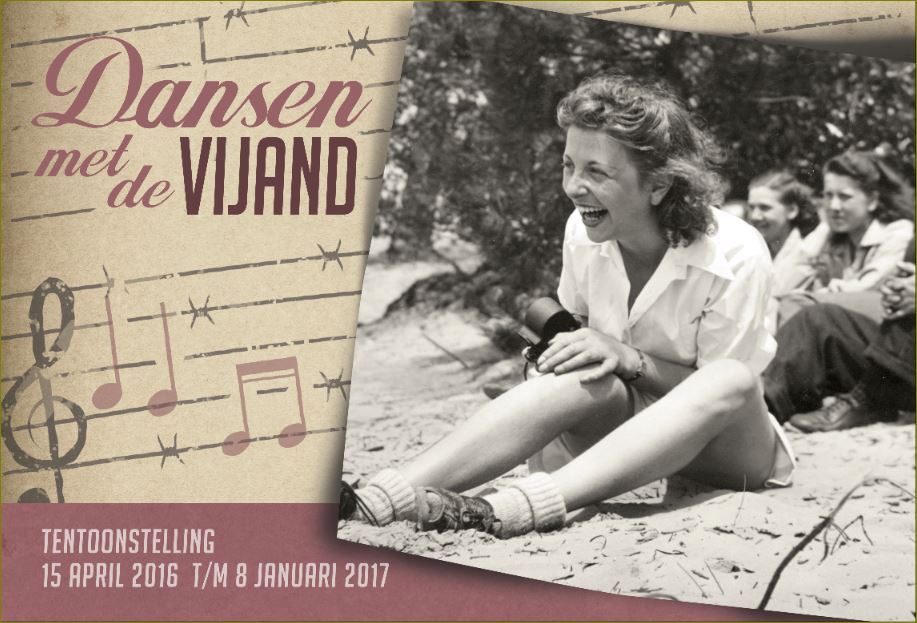 Sometimes there are no easy answers

The Nationaal Monument Kamp Vught presents interested institutions in the Netherlands and abroad with the chance of borrowing the exhibition „Dancing with the Enemy“ about the Jewish dance instructor Roosje Glaser who survived the camps Vught, Westerbork and Auschwitz and found a new home in Sweden. The exhibition addresses the difficult decisions Roosje Glaser had to make to survive, the estrangement from her family because of these decisions and how her newphew found it in himself to reach out to her.

The Nationaal Monument Kamp Vught is in close contact with Paul Glaser, Roosje’s nephew, who had grown up not knowing about his aunt and only discovered her story behind the „hidden signals“ bit by bit. In his book „Dancing with the Enemy“ he connects two storylines: his own research of the family history over several decades and the decision to publish it as well as the story of his aunt Roosje’s life.

Paul Glaser was born in 1947 as the oldest child of John Glaser, Roosje’s younger brother, and his wife Elisabeth. He was raised Catholic. His parents‘ experiences during the war had not been a topic of conversation when he was growing up. Nor had anybody talked about how his grandparents from his father’s side had died. His father’s family was small: There was only Aunt Roosje who lived in Sweden, but they were not in contact with her; his family on his mother’s side, however was particularly big. Paul had no reason at all to assume that there could be something in his family nobody talked about:

„Although I am curious by nature, I just didn’t come up with the idea of further researching my identity – and with it the past of my family. I didn’t feel like I was missing something.“*

In short chapters Paul Glaser describes how the family secret virtually imposed itself on him, appeared in „hidden signals“ and brought about his first questions about the background and history of his family. Each chapter illustrates how he gained a new insight regarding the family history. Most of the time it wasn’t Paul actively researching. Rather, the pieces of information came to him – in the form of random comments, accidentally finding Aunt Roosje’s letters from the war time or meeting relatives from his father’s side he hadn’t known before. Slowly Paul Glaser realized that his father’s family was Jewish and many of his father’s relatives had died in the Shoah. After intitial hesitations he began to think about what this meant for himself – as they were his relatives too.

„Almost 85% of the Dutch Jews didn’t survive the war. […] This number alone – and discovering that there was a connection with me – overwhelmed me. I would become crazy if I let this get even closer to me.“**

Paul’s father had never wanted to talk about it, not even after Paul had confronted him with his Jewish background. „It was clear that he didn’t want to talk, that he wanted to let bygones be bygones.“ (p. 100) But he gave his son some advice: not to speak about his Jewish roots. „Keep it a secret. If you don’t, they will use it against you sooner or later.“ (p. 100) This passage in the book is one of the few that suggest how traumatized John Glaser was: His parents were deported to and murdered in Sobibor – just like many other relatives. John himself survived the persecution in a hiding place. His whole life he had blamed his sister Roosje  for having appeared in public with fake papers and thereby also having put their mother at risk, makingh Roosje responsible for their mother’s arrest and deportation. This was the reason why the siblings had broken off all contact with each other after the war. Paul doesn’t blame his father for remaining silent, he respects it – just like the father respects that his son uncovers the family secret bit by bit.

The Holocaust as a part of his own family history

Little by little Paul uncovered the life story of his unknown aunt Roosje. Letters that Roosje wrote during her imprisonment in the camps Westerbork and Vught made him aware that Roosje had experienced persecution in the Netherlands – until then he had assumed that she had already lived in Sweden during the war. When he ffound out more about the deportation of Roosje and other relatives to Auschwitz, Paul realized the whole dimension of his discoveries.

„I knew what the Holocaust was from history books and documentary films and commemoration days, but until now all that had stayed more or less abstract. Only now, when I heard which tragedies my relatives had experienced, the distance fell away. I was deeply shocked and ashamed because I had been so unconcerned before.“ ***

Two years before her death, Paul visited Roosje in Stockholm in 1998. She showed him her photo albums from the prewar time. For the first time Paul saw photos of his grandparents and his father as a young man. And she openly talked about what she had experienced. In Paul Glaser’s text, Roosje’s life story gets more room than the description of his journey tracing the family secret.

The exhibition „Dancing with the enemy“. © Jasper van Goor.

With the detailed description of his aunt’s life, Paul Glaser shows respect for her fate and keeps it from being forgotten. Roosje’s diaries, photo albums and letters which Paul inherited after his aunt’s death allow him to tell Roosje’s story in the first person. This way he was able to avoid commenting or judging Roosje’s actions. Aunt Roosje had openly talked about her love affairs with (Dutch and German) SS members in the camps and that she had used this for her advantage and to survive. In Auschwitz she gave dancing lessons to SS men. On the other hand she was so disappointed by the Dutch people and their active role in the persecution of the Dutch Jews (her own non-Jewish husband had denounced her) that she settled in Sweden after the war.

Paul Glaser’s text is very discreet concerning emotions and discussions his discoveries (probably) provoked within his family. He focuses on his search for clues and how the pieces all came together over the years, rather an investigation than an emotional process. Nevertheless Glaser’s report is coherent, his reservation regarding personal feelings is understandable. After all, the book itself and how it pays tribute to Roosje’s life are a readable proof of Paul Glaser’s dealing with  his family history.

More information about Roosje Glaser and Paul Glaser’s work is available on the website „Tante Roosje“ in seven languages!

*Page 41 of the German translation.

Who was Roosje Glaser? was last modified: November 2nd, 2017 by Katja Hertz-Eichenrode
0 comment