In search of my grandfather’s history, Roger Vyvey, 70 years on 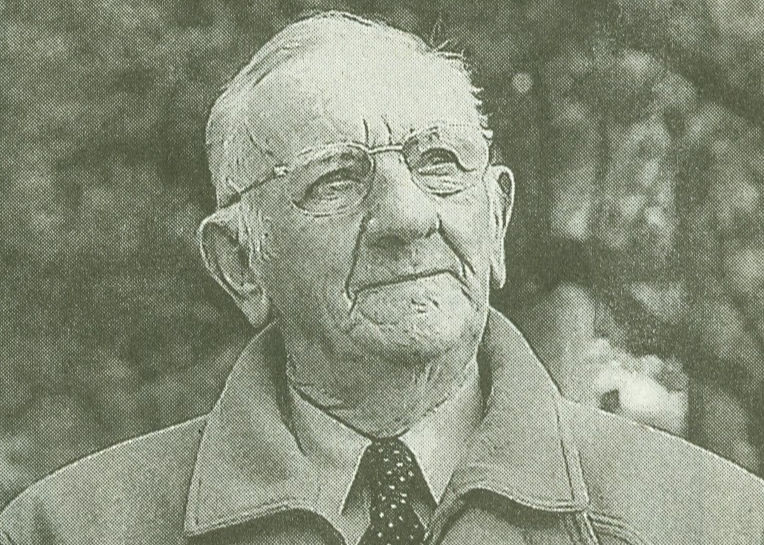 From the early age of 10 Kristof van Mierop got fascinated by WWII and the concentration camps because of his grandfather’s story. Not until 2015, when he was 39, he started to seriously probe into this history and he visited the places in Germany where his grandfather stayed during his captivity in the Neuengamme concentration camp. By a number of coincidental meetings his fascination became a hobby that has turned into a big thing. He is now committed to various Belgian and international associations, which are all active in researching data, remembering and recollecting this important past.

A bit of background

I was ten when I became interested in WWII and concentration camps in particular. Our entire family gathered around the radio set in the living room, our cassette recorder at the ready. My grandfather, Roger Vyvey happened to be on the Belgian Radio Channel (BRT) with an interview about his stay in the concentration camps. For about one hour we listened silently to his story.

My mother, Roger’s daughter, was about 33 years of age at the time and amazingly she heard the story of her own father also for the first time. She knew that her father had been in a concentration camp and that once a year he went to Brussels to a meeting with former political prisoners.  But she did not know what he had been through.

It happened during the second half of the eighties, when the holocaust and the concentration camps were in the spotlight again in the media and in a lot of documentaries. The radio interview with my grandfather was one of them. At that time, he also held talks at schools, but after a few times he was unable to continue. More than forty years later he woke up in the night bathing in sweat because of the lifelike nightmares consisting of memories of his stay in the concentration camp.

It sparked my interest in history. My grandfather considered this fascinating. I still remember that we were standing among the many books he had collected for the annual school competition of 11 November. He had launched this in 1964 and for 38 years had organized this himself and today this competition still exists. All schools in Nieuwpoort were provided with a questionnaire about themes like WWI, WWII and the royal family. The winners received a nice package of books. During one of my visits to him I also received the questionnaire and had to solve it.

In 1998 during my history training I had to make a family tree, and came across the story about Neuengamme, Blumenthal and the Cap Arcona again and spoke about this with my grandfather who told me a few things and showed me his archives.

On November 11, 2002 he became an honorary citizen of the city of Nieuwpoort because of the school competition and his commitment to the overarching organization of patriotic institutions.

Halfway through December 2002 he gave an extensive video interview for the Belgian Auschwitz Foundation about his story in the concentration camp. A week later he was admitted to hospital and he died at the end of January 2003. Now I feel…. that a chapter was finished.

On April 4, 1944 my grandfather was arrested at Nieuwpoort after being betrayed in his own resistance group. After captivity in Brugge and the “Nieuwe Wandeling” in Gent he was – like many Belgians – transported to Neuengamme in Germany with the transport of 31 August 1944. This only a few days away from the liberation, the town where he lived was liberated on 7 September 1944, the capital of Brussels even on 3 September. For Roger and many others hell really started then. He came to the main camp of Neuengamme (near Hamburg) where he received camp number 44444.

After a few days he was transported again to a satellite camp called Blumenthal in Bremen where he stayed from the middle of September until the beginning of April 1945. He worked in the forge of a nearby factory where they had to make submarine parts. The long 12-hour working day, the long roll. Calls in wind and weather, the little food, the many humiliations by guards, the heavy tortures he underwent after a machine for which he was responsible got jammed, this became his daily reality.

At the start of April 1945, the satellite camps were evacuated and he suffered the death march back to the main camp in Hamburg. There were constant casualties among the severely weakened prisoners. Then by train to Lubeck where, together with 10,000 other prisoners, he was embarked and transported to three ships in the Baltic Sea. He ended up on the luxury cruiser Cap Arcona. Because one day he couldn’t find his way back to his cabin he found himself in a large room at the stern of the ship. In retrospect that proved to be his salvation. At a given moment the people in this room were transported to the freighter the Athen. On May 3, 1945 the ships with thousands of prisoners on board were bombed, by the English by mistake. At that moment the Athen was not at sea anymore, but was moored in the port of Neustadt in Holstein, and subsequently was not bombed. Shortly after the bombing the 2000 prisoners on the Athen were liberated by the English. Thus, my grandfather was liberated on May 3, 1945. About 7000 prisoners died that day at sea on one of the sunken ships. He returned home to Nieuwpoort on May 24, 1945 as survivor of a serious hell.

In the summer of 2015, my wife and I decided to fulfill my long-lasting desire, namely visiting the places where my grandfather had been imprisoned.

We visited the place where at some point the satellite camp of Blumenthal had been, the site of the factory where he had worked, the Valentin Bunker, the main camp of Neuengamme (where I even found a letter from my grandfather, albeit post-war, in the archives), the Lubeck quay, where he embarked some 70 years earlier and Neustadt in Holstein, the site where he was liberated by the English on May 3, 1945.

An accidental meeting with Christel Trouvé responsible for the Valentin Bunker in Berlin, turned into more than a regular visit. She introduced me to Karsten Ellebrecht, a researcher who works on Bremen-Blumenthal, where my grandfather was imprisoned for 9 months. Since I was able to provide her with lots of valuable archival material, she invited me to the opening of the new visitor center in Bremen a couple of months later. And there things really kicked off.

In faraway Bremen I met Erald de Wachter, member of the Belgian Amicale Neuengamme I decided to become a member right away. My grandfather had also been a member, I had found two boxes of magazines of the amicale in his archives. Before our trip in 2015 I had tried to find the association, but had failed to find it. But she still existed…

A hobby that has got out of hand …

Sometime later the chairman of the amicale contacted me to tell me that he would take care of my membership and also asked me to be present, free of obligations, at one of the board meetings. He could use some younger members.

A few weeks later I travelled to Brussels by train to be present “free of obligations”. My fascination for the cause was already enormous, and had only been growing by the recent visits I had made. The fact that I could get involved in keeping this history alive through this association about the ex-prisoners of Neuengamme … I needed no more encouragement and within no time I was a member of the board.

Very soon after consulting the board I found my surplus value for the amicale. In my opinion the amicale badly needed a website, nowadays one doesn’t exist if you can’t be traced on the internet. Furthermore, I occupy myself in digitally archiving all the amicale’s data. Together with Tom Devos (N.C.P.G.R. Meensel-Kiezegem ’44) I succeeded in building a website for the amicale (www.neuengamme.be), and to digitize a list of about 2500 Belgians from Neuengamme. This list had been written down in a book and stored on old discs from the 80s. With the digital version we can easily look up data when asked by survivors.

Meanwhile Neuengamme has become a hobby that has got a bit out of hand. I joined the Amicale’s annual remembrance trip. We visited the main camp and several satellite camps and were present at several official ceremonies. In May 2017, 2018 and 2019 I took part in “the Forum of the Future”, organized by KZ- Neuengamme.  During the fall of 2017 and 2018 I attended the AIN congress, the overarching international amicale covering all the national associations that act on behalf of the former prisoners and survivors. Recently, in May 2019, we, a couple of enthusiastic 3rd and 4th generation survivors, have set up the “Young Committee” within the Amicale Internationale de Neuengamme. Our main goal is building an international network in order to involve younger generations of survivors and to help them research their families who have stayed in Neuengamme.

I find it fascinating to be able to play an active role in this history. I still find data about my grandfather, but my field of interest has widened to all the stories and experiences of the Belgian political prisoners in general, as well as the international context. I find it necessary that I, a 3rd generation survivor, just as a lot of 2nd, 3rd, 4th and even 5th generation, keep this very important history alive, especially since the number of eyewitnesses of the 1st generations are slowly declining.

In search of my grandfather’s history, Roger Vyvey, 70 years on was last modified: January 11th, 2020 by Kristof van Mierop
0 comment

Grandson of Roger Vyvey (NG 44444) who was arrested as a member of the resistance and taken to Neuengamme in September 1944. He spent almost the whole period in Bremen-Blumenthal and survived the death marches and the disaster in the bay of Lübeck at the end of the war and was liberated on 3 May 1945 in Neustadt in Holstein. Kristof has been active in the Belgian Amicale Neuengamme since 2015 to ensure that this important history of his grandfather and everyone else is transferred to future generations. Since 2019, Kristof is the general secretary of the Amicale Internationale KZ Neuengamme

Participate now! Space to Remember – Official opening in May