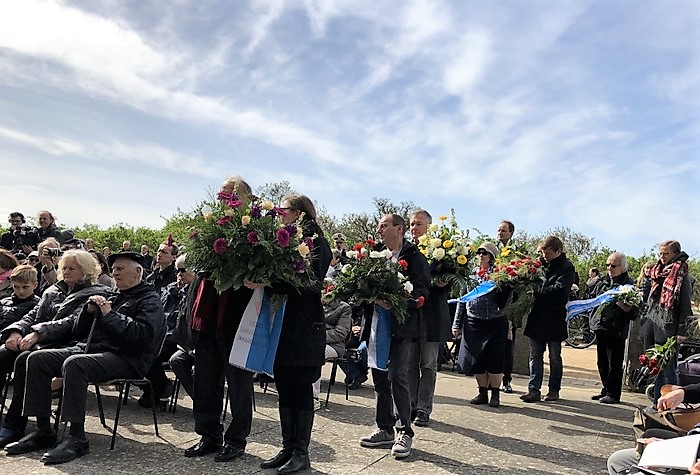 In her first article “My family made bombs for Nazi Germany as slave laborers during WWII” Roslyn Eldar, the daughter of a former Neuengamme concentration camp prisoner, shared her experiences visiting Hamburg (Germany) on the occassion of the 73rd anniversary of the end of the war and the liberation of the camps. Here she reflects on the service to commemorate the victims of  the RAF (Royal Air Force) bombing attack on three ships carrying concentration camp prisoners on May 3, 1945.

Thursday, May 3rd, 2018 was a huge day as we attended two International Commemorative Services. The first one took place in the morning at the Cap Arcona Memorial (in Neustadt/Holstein) on the Bay of Lübeck.

We were taken there in a large bus organized by the Neuengamme Memorial. There were about 55 of us in total, including 14 aging survivors and some of their family members from all over the world. We were accompanied by the minders for each survivor provided by the Neuengamme Concentration Camp Memorial and other young volunteers and “activists” concerned about the rise again of the far right. They handed out sandwiches and bottled water over the almost two hour bus ride. Wheel chairs and walkers were provided for the survivors on arrival, if needed. A table was set up at the outside event with more water.

A tragedy little known to the world

The service was to commemorate the victims of  the RAF (Royal Air Force) bombing attack on three ships: the SS Cap Arcona, the SS Deutschland, and the SS Thielbek, which, unknown to the RAF pilots, were packed with concentration camp prisoners.  Almost 7,000 prisoners died out of more than 9,000 on board all three ships.  They were burned alive by the bombing, or shot dead while trying to save themselves. So many souls on fire.

The prisoners were mostly from the Neuengamme concentration main camp and some from its satellite camps. The bombing happened just a  few hours before Hamburg surrendered to the British troops without resistance. The SS had started “evacuating” the Neuengamme main camp on 19 April 1945 and transferred some prisoners to the prison ships in the hope of removing all evidence of their atrocities before surrendering. The prisoners were concealed below deck in squalor and denied food or medicine for days before the bombing.

The RAF commanders ordering the strike believed the ships had leading SS personnel on board fleeing to  German-controlled Norway. The attack was intended to stop German forces from retreating across the Baltic Sea.

Bodies of victims washed ashore for weeks after the attack, and they were collected and buried in mass graves. The  British called the area” the Nazi beach of blood”. In fact, the survivors Mindu Hornick and Barbara Lorber recounted that after their liberation, when they were in nearby Haffkurg in a DP camp, every day they saw the bloated bodies of dead prisoners in striped uniform wash ashore on the Haffkrug beaches.

This was one of the biggest single-incident maritime losses of life in the Second World War and remains largely unknown.  Investigations post- war revealed that British RAF personnel had failed to pass on to the fighter pilots new information about the ships carrying prisoners. It was a tragedy of human error and miscommunication. Ultimately, the death of the prisoners, so close to the war’s end, was a tragic consequence of war. The British released their records about this in 1972.

The commemorative stone is erected in a clearing alongside the Bay of Lubeck. 621 prisoners are buried near this monument that lists the countries the prisoners came from. The 3rd May 2018 was a sunny day, spring time, not a cloud in the blue sky. No wind. The waters of the bay of Lübeck sparkled. Birds were chirping. Nothing on the day suggested the tragedy that happened here 73 years ago. The event was open to the public. There were about another 250 guests attending, mostly Germans who came to pay their respects.

We were seated outside, around the Memorial stone, facing it. We had front row seats as we were survivors or offspring of survivors of one of the sattelite camps of Neuengamme. Thankfully none of our family were involved in this particular tragedy but only because the ships were full when the “evacuating train”  from Muna Lübberstedt, the satellite camp were my mother and her relatives had been imprisoned, arrived to put the female  prisoners  on board. Another hell awaited our family .

The Service began with a solemn and deeply moving wreath laying ceremony. Approximately 15 wreaths were laid from various organizations. Representatives of each organization that provided a wreath approached the Memorial Stone, one at a time, placing its wreath down in front of the stone, and then stood facing the Memorial stone, in reflection, for about 30 seconds before walking away. This went on for about 15 minutes. No one spoke. We contemplated the lost lives and the suffering just 4 days before the world leaders met for formalize Germany’s unconditional surrender. The Nazis directed their final actions, not in repentance and saving the prisoners, but in mass evacuations of the Camps to conceal their crimes and in killing those who had managed to survive so much.

Hoping for a more peaceful world

There were speeches by representatives of the various organisations and survivors. We were given typed English translations. Jewgenij Malychin, a survivor of the bombing attack, noted that there is still no peace in the world. There are armed conflicts, terror attacks and life on the planet Earth leaves much to be desired. He encouraged younger generations to react to injustice and not to remain indifferent to it as all crimes are committed with tacit approval.

Unfortunately, another survivor of the bombing, Wim Aloserij who was meant to give a speech at the ceremony, passed away aged 94, the evening before the event in his hotel in Hamburg. His memoir De Laatste Getuige (The Last Witness) was presented in Amsterdam on April 4, 2018.

School students read excerpts from the former prisoners’ testimonies. A rabbi from the Jewish community in Lübeck closed with Kaddish in Hebrew.

After the ceremony was over, we were approached by two young German women in their early 20’s. They wanted to greet us. They told us that they are studying history, religion and anti-Semitism at university and hope to work in the field of commemoration. Again, I was impressed and surprised by the young Germans and their reactions to their country’s history, their desire to understand it and prevent it ever happening again.

A road trip in the countryside

At this point Mindu’s granddaughter, Bibi, had to return to the UK. The other guests of the Neuengamme Memorial also returned to the bus to be taken back to Hamburg, but Alyn Beßmann of the Neuengamme Archives had organized a special trip for our family group. I had told Alyn I really wanted to see Haffkrug, the DP camp on the Baltic sea shore where my family had stayed for about one month post war, before returning to Prague. Alyn had organized volunteer drivers, in their privately-owned cars, together with volunteer local historians, to take our two family groups (Mindu, Nicola, Alex, together with Barbara and her two grandsons and myself) and the minders, on a road trip.

We passed through beautiful German countryside for about an hour. We then stopped at Timmendorf to look at Dieksee, a lake where the Nazis had dumped ammunition at the end of the war. Here Barbara and Mindu and historians discussed the evacuation of Muna Lübbestedt during the final phase of the war. We also met a local resident, Kaethe Birkenfeldt, who has lived in the area since childhood. She was 12 when the evacuating train from Muna Lübberstedt pulled up by the lake.

She saw the Nazis dump some of their ammunition from the train into the lake to hide it from the approaching Allies. Kaethe remembers large metal boxes that the Nazis towed from the train to Dieksee lake, to sink from a bridge. The following summer the children played on the boxes not realizing they contained ammunition. Over time the boxes sunk.

Kaethe also remembers that the train stood on the track in Timmdorf, and some of the bigger boys from the village climbed on it. They said they had seen women in prisoner clothes – the Hungarian Jewesses from Lübberstedt, caged in the cattle cars. As a 12-year-old, Kaethe had approached the train and asked the prisoners if they had wanted anything.

At this point Barbara interjected, “I bet they asked for food”. Of course, Barbara was right.  As this discussion was taking place a train actually passed by.

We were supposed to continue to Plön where the British actually liberated my family in early May 1945, but alas due to time being short we decided to go directly to Haffkurg and skip Plön. Barbara was becoming too tired, at the age of 91, so she chose to return to Hamburg with her grandsons and their volunteer driver.

I was in another car with Mindu, her daughter Nicola and a volunteer driver. Mindu’s grandson Alex was in a 3rd car with the historians and minders.  We continued the drive for what seemed like hours toward Haffkurg,  but due to road blocks and direction problems we never reached Haffkurg. We saw road signs indicating we were close which got us so excited, but alas, the driver turned back as we had to attend the Neuengamme Memorial commemorative service commencing at 5 pm.

We had left Hamburg at about 7.30 am for the Cap Arcona service and it was now early afternoon. It was a long day. Mindu and I slept in the back seat on the return journey, exhausted and disappointed but greatly appreciative of the efforts of everyone.

“I wish my uncles could have had more time to make their mark on this Earth.”

From silence to commemorating together as a family