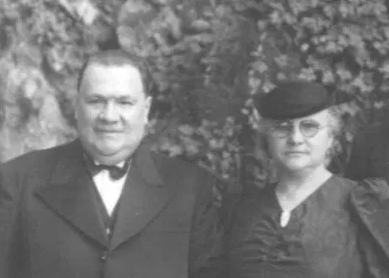 Interview with Jacqueline B.

Jacqueline B. (JB): My daughter discovered on the internet or on Facebook the union of Convoi 77 and I joined it without hesitation, that was quite clear to me. I contacted the chairman of the union, Georges Mayer, and he introduced the project to me. I then wrote a biography of my grandparents Luna and Avram Mordo who were deported with this transport.  It was the last one which left Drancy July 31, 1944 in the direction of Auschwitz. I wanted them to be named and the history of their lives – the little I know – to be mentioned next to the histories of the other deported people of this transport. These 1321 people are the only witnesses of the last days and hours of my grandparents. Together they went through this gruesome journey, the humiliating confinement, the hunger and thirst during this apparently great heat. They heard the cries, shared their fear and 726 of them also died. Only they know the conditions under which this train left the station of Bobigny July 31, 1944, and what really happened. Were my grandparents in the same wagon or had they been separated? Were they still alive when they reached Auschwitz and in what condition were they? What happened to the 300 children of which 25 were not even 4 years old?

For me this project is a possibility to keep up the remembrance of my grandparents and of those who could help them. When I read the already published biographies I am able to learn something about the people who accompanied them on this last journey.

SGR: You write: „mes parents ont peu et tardivement parlé, portant jusque´à leur mort une profonde blessure béante.“ Could you please explain what role the deportation and murder of your grandparents played in your family life when you were growing up? How did it affect he choices you made both growing up and as an adult?

I think I didn’t dare ask them questions in order not to intensify their sorrow.

They spoke more with my daughters, especially after the trial of (Klaus) Barbie in 1987. But how and  about what can one speak if one does not know anything … All of a sudden the parents disappear, some neighbors talk and that was that. I am quite sure that at the beginning they expected their parents to return. When the official lists were published after the end of the war there was no hope any more, there was the great gap. I, too, hoped that my parents would return. I was born after the war. I remember that on the way home from school I imagined that one day a woman or a man would sit opposite me on a bus and say to me, „Are you perhaps the daughter of Esther or Alexander? I think you resemble her/him“ – it would have been one of my grandparents whom I would have taken home happily.

I think that I wanted to console my parents and reduce their sorrow which they did not show with tears but which I could feel.

SGR: You and your sisters have „la volonté de garder et transmettre leur mémoire.“ Could you please elaborate on what – aside from participating the Convoi 77 project – you and your sisters do to preserve and pass on their memory? In addition to making sure that Avram and Luna Morda are not forgotten what is it that you would like to pass on to your contemporaries and future generations?

JB: I read historical publications on the murder of European Jews, reports of survivors, I took part in memory trips, saw films, I worked in an institution of the Fédération des déportés de France. Thus I was able to communicate with Jewish and for the most part non-Jewish survivors. But it is impossible to imagine the terrible conditions of survival and death and the older I get the more I feel the necessity to understand. I know what it is like to be a grandmother but I don’t know what it is like „to have greatparents“. I spoke to my children and I speak to my grandchildren. I try to write down what I know and to sort out the few photos and documents I have so that the generations to come will know the tragic history of our family.

The tragedy of deportation is deep in me and now that I am older I would like everything I know to be passed on. That is my heritage. I do it for me, for my descendants and for the memory of my parents and greatparents.

My family tree only has a few branches, but I would like it to be written. I am shocked when I hear comparisons between transports of deportees and the masses of people on the platform of the Metro or the living conditions of poor people. Without wanting to create a competition of victims the deportation of European Jews is – unfortunately – unique, can’t be compared.

SGR: Could you please describe how you would like the Convoi 77 project to evolve over the coming years? What are your wishes for the future of remembrance in general?

JB: The idea of bringing together the descendants of the deportees of the transport 77 is really excellent. It would be impressive if every name on the list could be assigned a face, a history.

I hope that the families will get moving to realize this project and that we as a reaction to the „extermination of the European Jews“ can manage to let their remembrance come to life again.

The participation in the meetings of the union offers me the possibility to get to know family members of deportees, to exchange our experiences, to find out whether they have further information in order to get more details about the last days of my grandparents. If I take part in the meetings of former deportees I always hope that somebody can tell me something about a family member who was together with them. I still hope – even after 75 years …

The European project “Convoi 77” and the History of Avram and Luna Mordo was last modified: January 8th, 2018 by Swenja Granzow-Rauwald
0 comment

Note from the editor – New supporters for the Reflections blog

Dealing with the experience of Nazi perpetration and persecution in families and society: Working with descendants