In the mediaPersonal Stories 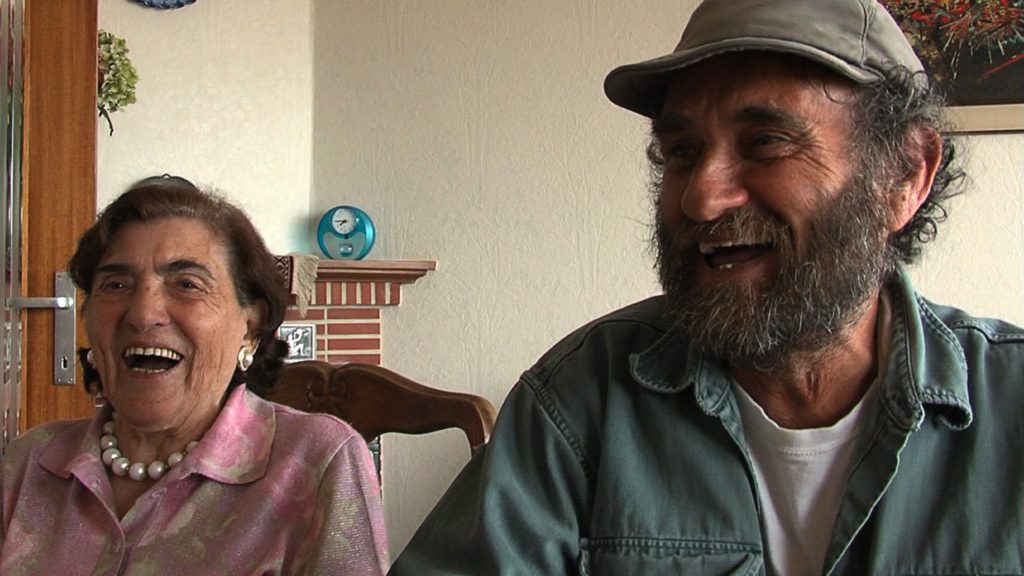 Are you Jewish or German?

An uncomfortable silence spreads through the movie theater. It’s the evening of the premiere of the movie „L’Chaim – To Life!“ in Hamburg. The young woman in the audience did not expect this counter question from Chaim Lubelski, the protagonist of the documentary. She takes several deep breaths before she answers in a defiant voice: „I am not Jewish.“ She presses her body into the cushion of her chair, shoulders drawn up to her ears. What will happen now?

and why Chaim Lubelski and his mother Nechuma, a Holocaust survivor, speak German with each other.

Lacking a sense of belonging

Chaim Lubelski shrugs his shoulders. Forced migration and persecution are part of his family’s history. Never staying in one place for a long time, never feeling at home and learning new languages again and again.

In using the dichotomy of “Germans“ versus “Jews“ Chaim Lubelski aims for more than being provocative. He alludes to the idea that people whose families have not been persecuted cannot understand what it means to live with the omnipresence of murdered relatives.

My whole attitude to life is actually very good – in a negative sense.

Chaim Lubelski never lived in one place for a long time. His travelling around the world had only one purpose: to escape the heavy burden that is his parents‘ past. Even the joints he smokes standing on the balcony or in the open window of his mother’s flat in Antwerp don’t help him suppress the constant feeling of restlessness. He is always in motion. In one scene in the movie he peels vegetables for his mother and places a sour herring on her plate. In another scene he makes tea. When the Polish household held props up Mrs. Lubelski on a walk, he shoos her away. He wants to go for a walk with his mother. It is not just Nechama who needs her son’s support, but he also longs for the feeling of being needed.

Elkan Spiller’s father is Nechuma Lubinski’s brother. He also survived the Nazi camps. The movie is not just a portrait of Chaim, the nonconformist, but also Spiller’s quest to find his own identity. Spiller wants the audience to leave the movie theater with two insights. He and his cousin as well as all the other children of Holocaust survivors have become who they are because of the experiences their parents had to make. Moreover, not just Holocaust survivors pass their suffering on to their children,  but all the people who have to live through war and terror.

This interpretation underlines the movie’s relevance. Nonetheless, the documentary is most powerful when the camera simply observes and Elkan Spiller doesn’t ask any questions. These scenes might be more ambiguous, but they portray Chaim Lubelski as an individual, not the victim of the suffering he inherited from his parents.

Chaim Lubelski pushes his mother in a wheelchair in a park. Her health has deteriorated so much that she no longer colors her hair. She hums a happy melody. Maybe it’s once again “Wien, Wien, nur Du allein!“ A song that Nechuma Lubelski sang in an earlier scene when she talked about her mother who had been murdered by the Nazis. It is a sunny day. Children are running around the nearby playground. He massages her shoulders and starts humming along with her.

This scene is testimony to the love between this mother and her son. It is a universal kind of love that adult children and their parents around the world share. No, this film is not about the dichotomy of Jews versus Non-Jews. It’s about living, despite and because of everything that was. “L’Chaim!”

We did not forget you!