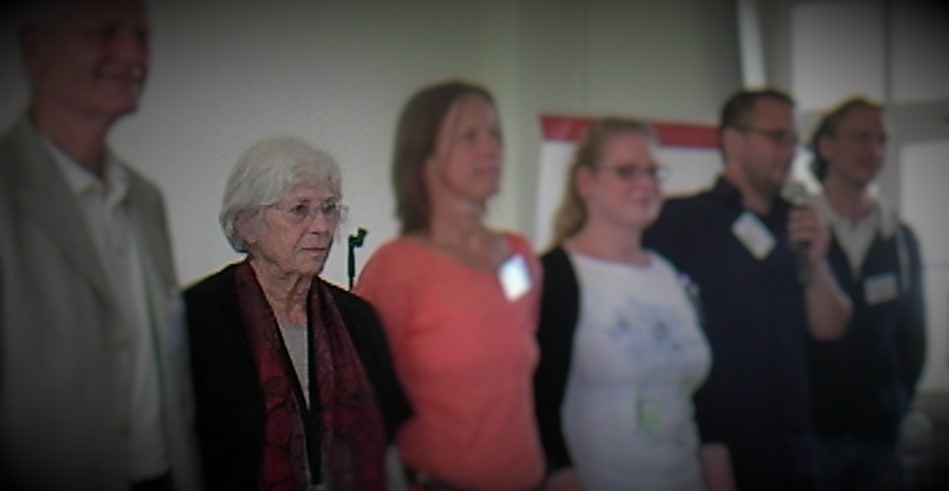 72 years ago, Yvonne Cossu-Alba’s life changed forever. She was eight years old when, on October 19, 1943, members of the Vichy militia together with the Gestapo arrested her father Robert Alba. He had been the leader of the French Résistance in the Crozon peninsula in Brittany. 18 months later, Robert Alba died in the Sandbostel reception camp to which he had been taken in April 1945 together with 9000 other prisoners of the Neuengamme concentration camp.

Fears and Prejudices turn into Friendship

For decades after the end of World War II, Yvonne had felt apprehensive about everything German. When she was 13 years old, she even refused to learn German in school:

I immediately rejected the possibility of learning German – it was unthinkable for me. The people who spoke that language had arrested my father, had killed him. I still had in my ear the harsh sounds I heard when they lived very near us, in the school-house they had occupied […] That choice was certainly influenced by the loss of my father.

It was not just the sound of the language used by the people who had caused her father suffering that made her cringe. For a long time, the mere thought of visiting the country where her father had been killed was unbearable. Yet, during the Forum “Future of Remembrance” organized by the Neuengamme Concentration Camp Memorial in May 2015 – 20 years after her first visit to the Memorial – she walked hand in hand with her German friend who has long denounced his father as a Nazi perpetrator.

It was a big step forward for me in the way of openness to others, and I am grateful to the Gedenkstätte to have organized the Forum and thus given me the opportunity to ponder over the subject and see things from a different and wider point of view … I also realized how much strength and courage is needed by families of perpetrators to stand against their heritage.

Yvonne no longer wants to live in the past.

No future without remembering

In fact, Yvonne’s main concern today is the future. Together with Jean-Michel Gaussot, whose father also died shortly before the liberation of the Nazi camps, she works actively in the Committee “Memory, History and Future” of the Amicale française de Neuengamme et de ses Kommandos. In 2009, this committee issued a manifesto in which members of the Amicale recommit themselves – amongst other promises – to continuing the fight for freedom started by the members of the Résistance as well as placing a halt on the rise of right-wing ideology.

Yvonne Cossu-Alba was President of the Amicale française from 2002-2006. © Y. Cossu-Alba’s private archive.

It worries Yvonne that, despite the call for action issued by organizations like the Amicale, people around the world still turn a blind eye on intolerance, racism and nationalist feelings of superiority. It’s her hope that, by working with school children, the vicious cycle of more and more wars can be stopped.

If only young people could believe us when we tell them how useless wars are, how baleful and dangerous extreme nationalist speeches are. If only they could come back to the 1960s’ slogan “make love not war”. Yet I feel so old-fashioned saying that. They would probably laugh at me.

In her genuine modesty, Yvonne underestimates the effect the books about her father’s story and her life without him have on their readers. Through Interdit d’oublier: mémoires de guerre d’une enfant de déporté-résistant (1997) and its later and more complete version, Robert Alba: aller sans retour pour un camp nazi; Châteaulin, Neuengamme (2007), people learn about Robert Alba, the engineer who put his knowledge to use for the Résistance. Moreover, they provide insights necessary to understand how the Nazi crimes continue to affect the families of the deportees around the world.

When Yvonne shares her fondest memories of her father, the man in the picture with the little girl comes alive. On Sundays he would dedicate his time to his wife and daughter. He who so enjoyed wood work made a desk and a small cupboard for Yvonne. After a few hours dedicated to woodwork, he would take his family to the village to meet with friends or to the Breton countryside where they would pick wild flowers and mushrooms. Yvonne recalls that he knew the mushrooms well and taught her how to recognize the good ones.

On these excursions my father would also tell us about his beloved Pyrenees. He made a promise that, after the war, we would climb Mount Cagire together.

It was not just an appreciation for beautiful landscapes that Robert Alba passed on to his daughter, but also a love for music. Her grand-parents, who lived in La Forêt-Fouesnant, had a neighbor who had played the piano at the Brussels opera. Together with another Belgian refugee who was an amateur violinist the neighbors gave concerts at Yvonne’s grand-parents’ small house. One of these private concerts is forever engrained in Yvonne’s memory.

I remember that Sunday, we were all gathered in the best room and I was sitting on my father’s knees, near the piano, and we were listening to a violin and piano duo and it was so beautiful that it made my flesh creep – it was my first musical emotion and it is linked to my father’s presence.

The little cupboard made by Robert Alba today stands in Yvonne’s living room. In it she keeps her most beautiful glasses. While the little desk made by her father remains in the house in Brittany, the desk he used to work on – along with his leather writing pad – stands in her apartment. Robert Alba’s only personal belonging that was returned to his family from Germany is his wedding band. Yvonne now wears it on her right hand.

In Châteaulin a street is named after Robert Alba. © Yvonne Cossu-Alba’s private archives 2008.

Yvonne and her mother, who had clung to each other very closely after Robert Alba’s arrest, learned of his death in the summer of 1945 from a doctor who had known Robert Alba while they had both been prisoners in Neuengamme. While acting on the outside as was expected of her, Yvonne secretly did not give up hope that her father had somehow managed to escape and was living far away, maybe even in Russia. In retrospect Yvonne thinks that not speaking about her dream meant that she didn’t have to accept the truth.

I think it was due to the fact that he was buried in a mass grave and he never had a grave of his own, so I could not believe he was really dead. No visible token, so no death.

Accepting her father’s death also meant acknowledging how he had died. Knowing what her father had to endure has cast a shadow over her life. The image of the horrible treatment that led to his death has stayed with her.

Suffering in a Nazi concentration camp meant death in the end, which is a kind of slow assassination.

Dr. Cornu had first met Robert Alba in the Compiègne transit camp and had become a very close friend during their time together in Neuengamme. For two months in early 1945 they were separated when Robert Alba was sent to do work in Hamburg while Dr. Cornu remained in the main camp. They were only reunited shortly before Robert Alba’s death, but he hardly recognized his friend who had turned into a mere skeleton.

Yvonne is grateful to Dr. Cornu because, thanks to him, she and her family were quickly informed about what her father had had to endure in the Neuengamme concentration camp. Some of her friends never found out what had happened to their fathers after their arrest. Some had never even had the chance to get to know their fathers because they had not been born when their fathers were snatched away by the Germans.

Every story is important

For the families of concentration camp prisoners around the world she has some advice:

Write about your relative. Even if you think it is for your own benefit only, it might still be useful for a larger audience. Your own experience, your way of thinking and describing facts might be of some help to other people. Every single story about a prisoner helps us finding and re-building the historical truth. It can spark an interest in the younger generations enticing them to learn more and, ultimately, to fight modern-day racism and fascism.

Those who want to carry on the legacy of her father and his fellow European resisters she urges to remain hopeful, to continue to demand peace and tolerance and to persuade others to join their cause.

Let us convince people that – through their civic behaviour –
they can make this world a better place.
The more people engage in this open debate,
the more we will have a chance to be heard.

“Every story and every voice counts!” was last modified: November 18th, 2020 by Swenja Granzow-Rauwald
0 comment