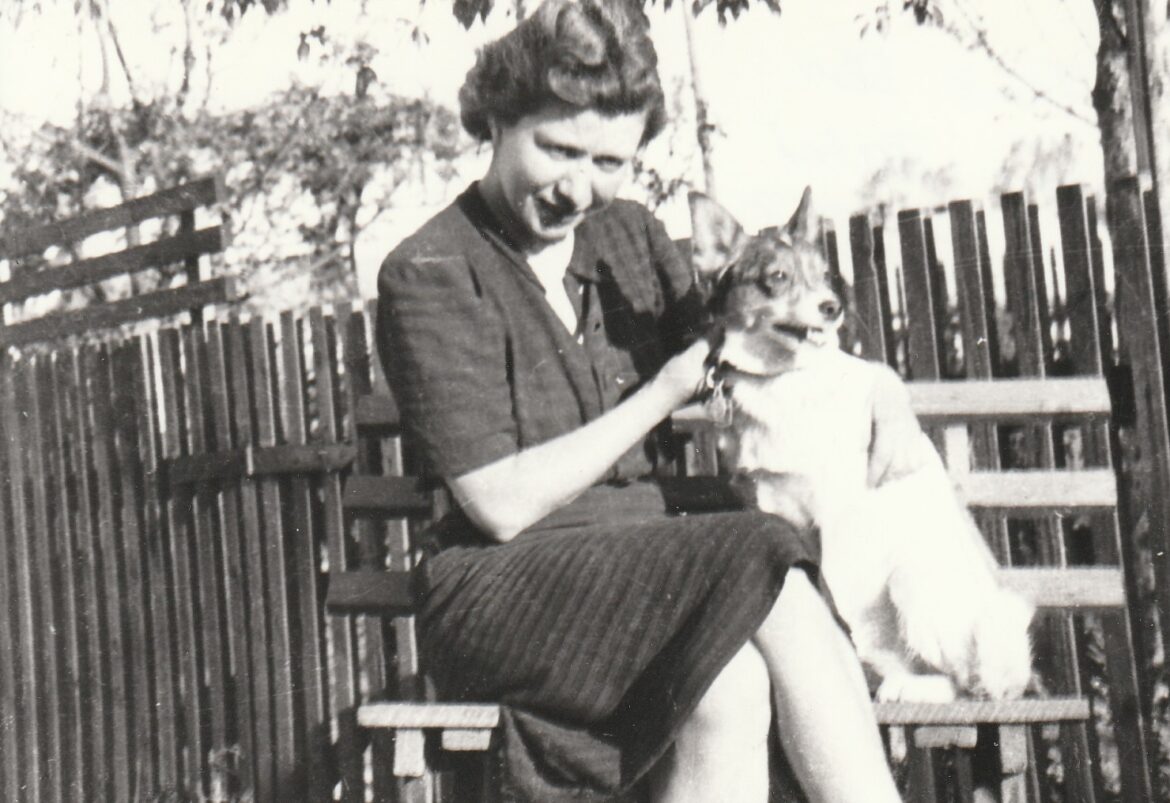 In 1985, the last two letters from the imprisonment of Elisabeth Sztwiertnia, my great-aunt, from 1944, fell into my hands for the first time. She was the big sister of my grandmother Maria Zabrzynski. Before that it was always said that she had died in Berlin in a bombing raid.

However, her fate had become a family secret, as her murder by the national socialist People’s Court, as well as the experience of war and expulsion from what was then the Sudetengau, had traumatized her sister (my grandmother) and her relatives. Only gradually was my grandmother able to tell me fragments of the true story, the rest I found in the trial files of the Federal Archives.

My great-aunt Elisabeth Sztwiertnia was born in Troppau (today’s Opava) on March 26, 1905, as the daughter of Franz Sztwiertnia and his wife Maria Fiala. Two years later, also in Troppau, her sister Maria (my grandmother) was born. Franz Sztwiertnia died already in 1909 and his wife in 1915, so that both girls soon became orphans and got a guardian. Not least because of this, Elisabeth felt responsible for her younger sister throughout her life.

A happy child who loved animals

Elisabeth was a cheerful child. After five years of elementary school and three years of middle school, she attended the commercial school in Troppau in the 1920s. According to the memories of a schoolmate from July 1985, she was always up for practical jokes and there was always something to laugh about with her. She was especially fond of animals. Pictures show her as a child with her little sister Maria and her dog Schipsel, with the goat of acquaintances and later with the cat of a friend. Last she owned a small dog named Batzi. In her petitions for pardon, she mentioned that she was active in animal protection. After business school, Elisabeth worked in Vienna at a film newspaper as a clerk and from 1926 in Berlin at the Jewish company Fromm as a cashier. In 1929 she returned to Troppau. From 1932 to 1938 Elisabeth was employed by the Jewish company Silesia as a correspondent and had a love affair with the Jewish engineer Viktor Potaravsky from Brünn, today’s Brno.

Life under the terror of National Socialism

Thus, Elisabeth must have directly experienced the terror of the Sudeten German National Socialists from 1938 onwards after the annexation to the German Reich, especially against the Jewish population. The Jewish entrepreneurs were expropriated. In May 1939, there were only about 2400 Jews left in the so-called “Reichsgau Sudetenland”, most of whom were still deported to concentration camps.

In our family Viktor Potaravsky was considered missing from 1938 on, according to the memories of the already mentioned schoolmate he probably escaped to England. Unfortunately, no further data on Viktor could be found in the relevant archives (Arolsen Archives, Yad Vashem, Association of Jewish Refugees).

This made it difficult for Elisabeth not to live her life along the lines of hatred drawn by the National Socialists. The separation from her fiancé was particularly hard on her, and she also had to care for her aunt, who was seriously ill, so that she suffered from constant insomnia and was treated by a neurologist. On December 13, 1938, she finally found work with the mayor of Troppau as a clerk.

Ultimately, she was also separated from her sister, whose husband Herbert Zabrzynski (my grandfather) had to work as an electrician in Jauer (today’s Jawor), over 200 km away, starting in 1938 and left Troppau with his family.

From January 1944, a group of English prisoners of war probably regularly marched past Elisabeth’s apartment in Lichtensteinstraße. Perhaps she assumed at that time that the National Socialists would soon lose the war and that it would be possible to make contact with her fiancé in England through one of the prisoners.

Then, on March 31, 1944, at shortly after 7:30 a.m., the fateful thing happened: Elisabeth ran after the group of prisoners and, according to her statement to the local investigating judge, tried to hand an Englishman slips of paper and cardboard covers showing Hitler on a gallows and the English flag, because she had fallen in love with this Englishman and wanted to arouse his sympathy. Possibly she could destroy a message to her fiancé in England and distract from her attempt to contact him with this version of the motives.

However, there was no contact with the prisoners; the guard and passers-by became aware of her, she tried to escape, but was caught by the passers-by (all National Socialist party comrades) and handed over to the Secret State Police (Gestapo).

The public prosecutor’s office in Troppau handed over the case to Berlin and there, on May 10, 1944, Reich prosecutor Parrisius requested the opening of the main trial against Elisabeth Sztwiertnia before the People’s Court for the crime of “favoring the enemy” according to the then § 91b of the Criminal Code. On June 14, 1944, she was sentenced to death for this crime, or rather for “Wehrkraftzersetzung” (§ 5 of the then War Special Criminal Code). The National Socialists liked to use these legal norms to execute their “national enemies” even for trivialities, although the norms also provided for lesser punishments for less serious cases.

Elisabeth and her sister filed a total of three petitions for pardon, to which they received no response. Instead, the Reich Minister of Justice issued the execution order of the death sentence on July 26, 1944, and – even more – in the dispatch of August 01, 1944, to the Chief Reich Prosecutor at the People’s Court, the Ministry specifically requested that the proceedings be accelerated. On August 11, 1944, Elisabeth was decapitated with the guillotine in the Berlin-Plötzensee penitentiary.

In 1985, I first began to do research on the basis of Elisabeth’s last letters and also inquired at the Central Office of the State Justice Administrations for the Investigation of National Socialist Crimes in Ludwigsburg ( in the following referred to only as the “Central Office”). The Central Office then began preliminary investigations, made the verdict of the People’s Court available to me, and transferred the proceedings against the First Public Prosecutor at the People’s Court, Heinz Heugel, who was still alive and had participated in the murder, to the Public Prosecutor’s Office at the Berlin Regional Court. The proceedings against Heugel were immediately discontinued due to his inability to stand trial. For the remaining, possibly still living perpetrators, the Berlin public prosecutor’s office denied jurisdiction. So it seemed that the remaining perpetrators might have been too old or might have fallen through the net of the Federal Republic’s federalism of criminal law. But a feeling remained with me that something was wrong.

At the end of 2019, I looked at the documents again and made an appointment in 2020 at the branch office of Department B of the Federal Archives in Ludwigsburg, since the documents of the “Central Office” have been made available for use there since 2000. In the file I then had to discover that in 1985 essential documents such as the interrogation protocols had not been handed over to me at all and that indications of further participants in the crime had not been followed up. Since then, I have been working on a longer text describing the perpetrators and their way of thinking, insofar as information on this could still be found, and investigating the reasons why Elisabeth’s murder was not prosecuted further.

Eventually, I hope to find schools and authorities in Opava and in culturally cooperating German cities like Bamberg that I can convince to participate in a commemorative project for Elisabeth and other victims of National Socialist terrorist justice in what was then the Sudetenland, for a joint commemoration of those who were not heroic resistance fighters, but who – like Elisabeth – did not want to hate from one day to the next the people they loved yesterday, who avoided the Hitler salute and perhaps wanted to continue to believe in God but in any case not in the Führer, and whose courage or despair cost them their lives for that very reason.

The story of Wim Aloserij travels the world