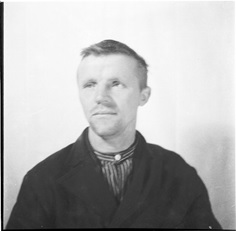 One of the goals of the Stichting Oktober 44 is staying in touch with the relatives of the victims of the Putten raid that took place on the 1st and 2nd October 1944.

The story of the raid of Putten – Putten is a village situated at the Veluwe, an extensive forest area in the Dutch province of Gelderland.

The Dutch resistance had committed an attack on a car with German soldiers in it. A few hours later, on Sunday morning, October 1st 1944, Putten was hermetically sealed off by a regiment of the German Wehrmacht. Men, women and children were driven to the centre of the village, even from the wider surroundings. In retaliation for the unsolved attack, 660 men were then deported to German concentration camps on Monday, October 2nd, 1944. The same evening, about a hundred houses in Putten went up in flames. After liberation it turned out that not even ten percent of these men survived the deprivations of the camps in Germany.

Can you please introduce yourself?

I am Cees Fredriksen, born in Putten in 1952, so after the war. I was a truck driver for many years and now I am retired since 2018. All my life I have lived in Putten.

What is your relationship to Neuengamme concentration camp?

My grandfather, Cornelis Tijssen and his brother-in-law Willem van de Kraats, were arrested during the raid in October 1944.

They were taken, together with all the other captives of the raid, via Putten station to the Amersfoort Police Transit camp. From there they were taken by train to Neuengamme concentration camp. My grandfather and his brother-in-law then had to do forced labor in Hamburg. Grandpa died there, his brother-in-law a few weeks later. My grandfather was the father of my mother.

What does that mean for your grandfather’s family?

My grandmother was left on her own with 6 children, including two twins aged one and a half. I never heard a word about Grandpa from my grandma, my mother or anyone else.

Just like the other small farmers in the area, they had some cows, chickens and such, as well as a vegetable garden with which they were able to provide for themselves.

I have no idea what all this has meant to my mother. She never talked about that time.

What does that mean for you?

As I grew older and thought about the raid and the war, questions came up. I asked my uncle, my mother and an aunt these questions, but I did not get an answer.

What does it mean to you that there were no answers to your questions?

I have to accept that I’m not getting any answers to my questions. Before, I didn’t care about it that much. Now, unfortunately, it’s too late.

Which questions do you ask yourself?

The most important questions are: Am I like him? What was he like? Are there many similarities between us? Did he love nature, animals and these things? Unfortunately this generation is no longer alive. So sadly there won’t be any more answers to my questions.