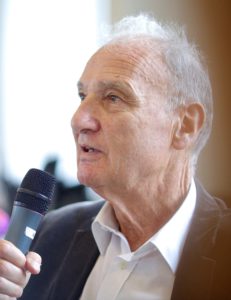 Growing up without a father

Jean-Michel Gaussot grew up having the vague idea that his late father had been a hero. “Your father died for France in a concentration camp,” his mother had told him and his sister Christine since they had been small children. Only as he grew older did Jean-Michel Gaussot really fathom the depth of what had happened to the father he had never had a chance to meet. Seven months before Jean-Michel Gaussot was born the Sicherheitsdienst had arrested his father Jean Michel Joseph Gaussot on March 3, 1944. He was never to see his son as he died in the Wöbbelin reception camp in late April 1945.

Jean Gaussot had been a promising young lawyer in Paris when he became a member of the Résistance. He did not tell his family that he was helping to send information to Britain via broadcasts. Today, his son suspects that he probably did not want his young wife to worry about the risks his involvement entailed, both for him and his family.

Carrying on his father’s legacy

For more than nine years now Jean-Michel Gaussot has been a very active member of the Amicale française de Neuengamme et ses Kommandos, an organization that had been founded in 1945 by a group of survivors. It aims to preserve the memory of the deportees and their ordeal in the Neuengamme main camp and its satellite camps as well as to bring the perpetrators to justice and to prevent the repeating of history.

Jean-Michel Gaussot with participants of the multi-generational meeting held at the Neuengamme Concentration Camp Memorial in 2014.© Mark Mühlhaus, attenzione photographers 2014.

Even before his involvement with the Amicale it had been very important to Jean-Michel Gaussot to honor the victims of Nazi crimes and “to help young generations to learn from that somber past.” Today, the time he invests in furthering the Amicale’s mission also strengthens the bond that connects him to his father:

I see my commitment within the Amicale as a kind of tribute to my father, who died when I was six months old and whom I did not have a chance to know. I feel it offers me a possibility to continue, in a very modest way, the fight for freedom that cost him his life.

From Paris to Northern Germany

Like many other Résistance members from Paris Jean Gaussot was taken to the Fresnes prison outside of Paris where the captives were held and questioned under inhumane conditions. The next stop on his journey to the Neuengamme Concentration Camp was the transit camp of Compiègne-Royallieu. There he was put on the first transport to the Neuengamme concentration camp.

After just a few days in the Neuengamme main camp he and 800 prisoners from different European countries were taken to the satellite camp of Fallersleben-Laagberg where they were exploited by the Deutsche Bau AG having to build a new “village” for Volkswagen. While imprisoned in Fallersleben, Jean Gaussot received the news of his son’s birth.

As the Allied troops were closing in on Fallersleben, Jean Gaussot and the other prisoners were taken on a horrific train ride on April 7, 1945. Eight days later they sat foot in the Wöbbelin reception camp. Malnourishment and diseases killed 1000 prisoners until the liberation of the camp on May 2, among them Jean Gaussot.

61 years after their father’s death Jean-Michel Gaussot and his sister went on their first pèlerinage with the Amicale française, a yearly trip to the memorials for the Neuengamme main camp and several of its satellite camps.

On this trip they met Robert Pinçon, then Secretary General of the French Amicale and President of the Amicale Internationale de Neuengamme. Jean-Michel Gaussot learned from Robert Pinçon about his activities for the Résistance in Touraine, the excruciating physical labor he had had to do in the clay pits and the brick factory of the Neuengamme main camp and his tenacious fight for a worthy memorial for the Neuengamme main camp.

The future of the Amicale

The loss of the deportees also means a loss of powerful spokespeople for the Amicale threatening to diminish the influence the organization still holds today.

One option for strengthening the organization’s influence, according to Jean-Michel Gaussot, is cooperation with other single camp amicales. The first step in this direction has been made, that is, the different amicales have started to congregate under a loose umbrella organization called “Interamicale.” All the single camp amicales share the emphasis on upholding the values the Résistance had fought for, the promise to keep the detainees’ memory alive and the fight against a new rise of right-wing ideology.

In fact, the Amicale française de Neuengamme et ses Kommandos reaffirmed their allegiance to these goals with a manifesto in 2009 that had been drafted by its committee “Memory, History and Future.” Together with Yvonne Cossu-Alba, the daughter of a French Résistance member killed just days before the liberation of the Sandbostel reception camp, Jean-Michel Gaussot co-chaired the committee for a short while. Even though he has not been able to invest a lot of time in the committee’s activities lately, his position on its value remains unchanged.

The work of the committee seems essential to me as there is so much to be done to preserve the memory of what the déportés, detainees or Häftlinge went through.

Now some younger members of the organization have taken over the reins on this committee. Jean-Michel Gaussot is pleased tabout this development. However, more could be done in this area, he thinks.

As the deportees gradually disappear, we must prepare for working without their helping and encouraging presence […] But it is important to try and convince young people, from the third and fourth generations, to carry out with us this great task of keeping memory alive.

Yet, it’s not just younger people whose support for the Amicale Jean-Michel Gaussot finds crucial, but he also attributes great importance to the work done by the Neuengamme Concentration Camp Memorial. However, the alliance between the Amicale and the Memorial has been particularly affected by the loss of the former prisoners.

Jean-Michel Gaussot at the commemoration on the 69th anniversary of the end of the WWII at the Neuengamme Concentration Camp Memorial. © Mark Mühlhaus, attenzione photographers 2014.

Robert Pinçon and the other survivors – over the years – had built a close bond with the director and the staff of the Neuengamme Concentration Camp Memorial. As fewer and fewer of them have the ability to further the goals of the Amicale the once very close relationship with the Memorial is becoming looser. Jean-Michel Gaussot finds that the language barrier is more apparent than ever. Unfortunately, he says, most of the Memorial’s staff don’t share a common language with the members of the Amicale.

While he is doubtful that the language barrier will disappear soon, a good start for building stronger ties would be “organizing more systematic and enlarged contacts on the occasion of the yearly trip of our Amicale to Neuengamme.” Even exchanging more information via e-mail, he thinks, could improve relations.

The visit to the Neuengamme Concentration Camp Memorial in 2006 was not the first time Jean-Michel Gaussot had spent time in the country where his father had been killed. In fact, his first posting as a career diplomat took him to Bonn, then the capital of the Federal Republic of Germany. It is apparent that the notion of guilt by association seems to be a concept that carries no value for Jean-Michel Gaussot. Even when he talks about his family history there is no sign of anger in his voice and no hatred tainting his words

In the 39 years serving the French Republic in various countries around the globe he ensured that French interests were met while also strengthening the international community. The foundation for this international mindset had been laid when he was a high school exchange student in Hinsdale, near Chicago.

It was a fantastic experience which changed my perspectives and gave me a strong interest in international contacts, as I had not only „discovered America” but also had many contacts with other American Field Service students from all parts of the world.

The next time he lived in the United States it was in New York as he had been made first counselor at the French mission to the UN during the height of the Iraq-Iran conflict. Another posting – also pertaining to a conflict – stands out from the list of countries he worked in. For one year he was co-chairman of the Israel-Lebanon Monitoring Group formed to protect civilians in South Lebanon and Northern Israel after the Grapes of Wrath Israeli military operation.

It was a delicate and challenging mission […] Each time there was an incident which prompted a complaint being lodged by one of the parties, we met in South Lebanon and had extremely complicated negotiations – lasting usually the whole day and the following night until dawn – led by my American counterpart and myself, to establish responsibilities and try to avoid escalation of the fighting. […] it was one of the rare situations in which as diplomats we could feel we were making a difference and contributed to saving lives.

While Jean-Michel Gaussot chides himself for having been “too busy and too often far away from my country to involve myself in activities linked to my father’s fate” before his retirement, it is easy to see that as a diplomat he was guided by a vision of freedom for all, a vision shared by his own father as Jean-Michel Gaussot has himself expressed.

A true diplomat, on and off the stage

Aside from freedom another value held high by the members of the Résistance has been fraternity. During Jean-Michel Gaussot’s visit to the Neuengamme Concentration Camp Memorial in May 2014 he underlined that this solidarity could not only serve as a bond between the descendants of former concentration camp prisoners, but could be extended to also include the relatives of Nazi perpetrators.

His conciliatory demeanor during the multi-generational meeting that the Memorial had organized to bring together survivors, relatives of former prisoners as well as German students and interested individuals to discuss the future of remembrance made him the ideal drafter of a declaration by all the participants. It was presented publicly during the commemorative service held on May 4, 2014 on the occasion of the 69th anniversary of the end of the war and the liberation of the camps.

Without Jean-Michel Gaussot the following vision from this declaration would not have been possible:

The children of perpetrators and the children of concentration camp prisoners, especially those whose fathers and mothers did not survive, share a pain. This shall not separate them, but, to the contrary, help them become closer. They each have to cope with the past for which they are not responsible. They can and should collaborate so that the crimes committed or experienced by their parents will not be repeated.