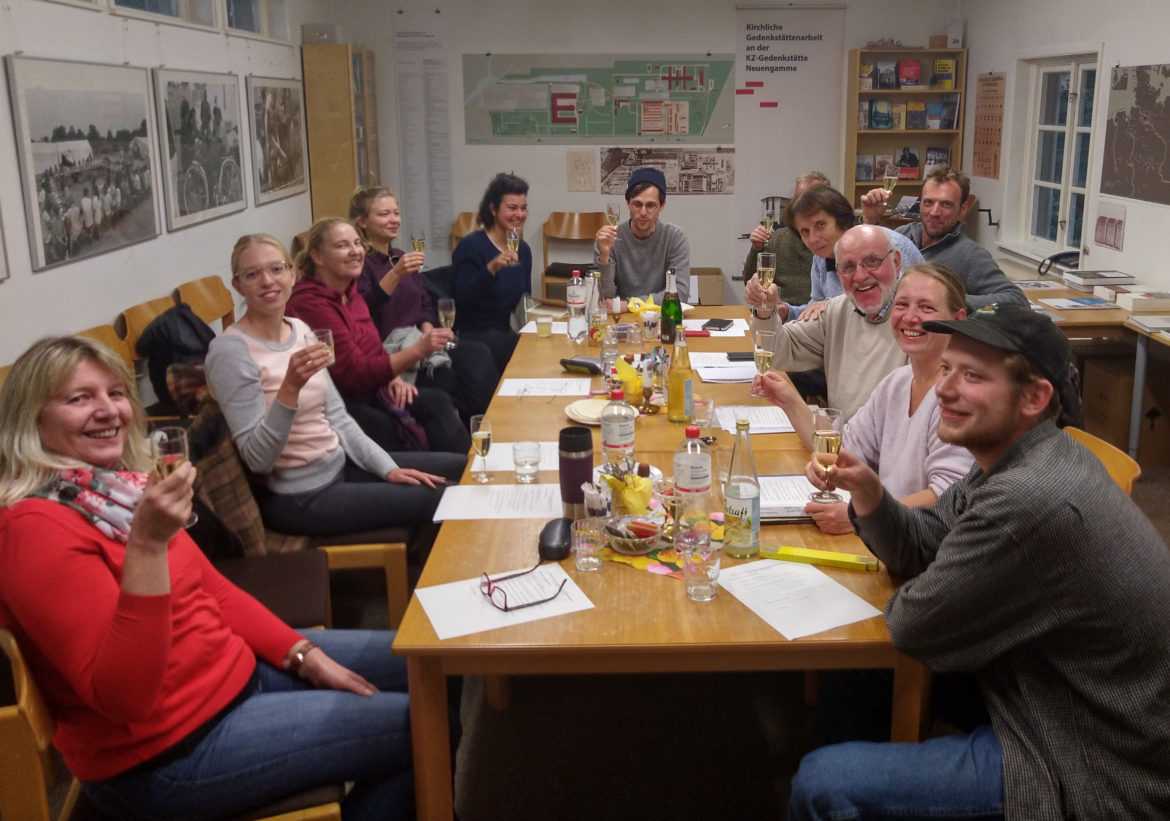 For many years, we have been wishing for an opportunity for descendants of former prisoners of Neuengamme concentration camp from various countries to honour their family members by name and to express their personal attachment to them at the historical site of their suffering.

Students design the “Space to Remember”

In May 2018, students of the HfBK promised their support in order to develop a “Space to Remember”. This was followed by 18 months of intensive cooperation. The students took the time to listen to us, learn about our stories and understand what the NS persecution of a family member means for their children and grandchildren. They have dealt in detail with the history of Neuengamme concentration camp and the grounds of todays memorial. Also, they developed a wealth of ideas about what our “Space to Remember” might look like.

At the heart of their proposals – which were hotly discussed – was the basic idea of considering commemoration and remembrance as active processes that are or should be carried on.

Accordingly, instead of a large monument, they now developed the idea of an active approach towards memory in the shape of a “workshop”. Many drafts were designed. We liked best their idea of realizing the project as a printing workshop.

Via a website, descendants of former prisoners of Neuengamme concentration camp from all over the world can share posters to commemorate their persecuted family members, regardless of whether these people were only imprisoned for a short time or for several years, whether they survived the detention or lost their lives in the concentration camp.

These posters can be designed freely and individually, including photos, drawings, quotations, biographical information, letters to the relative – in short, with everything that speaks from the heart of the family member who designed them. The descendants have the floor!

From the poster designs, printing plates are then produced about twice a year by a company using laser technology. These printing plates are presented on the grounds of Neuengamme Concentration Camp Memorial in openly visible shelves in a way that the relatives name is easy to read.

Carrying Memory into the World

The actual text that appears mirror-inverted on the printing plate only becomes readable when posters are produced from the printing blocks. These can be printed by the descendants themselves, but can also – according to the students’ idea – be printed by visitors of the memorial, possibly as a part of educational projects. The prints can either be taken home and distributed to the family, or they can be put in other places so that the memory of the prisoners can be carried around the world.

Billboards are available on the grounds of the memorial to present the printed posters. In addition, the prints are to be presented online in the form of a digital archive, so that they can be seen worldwide.

“Space to Remember” as an Ensemble

The printing workshop finds a space in the “Plattenhaus” next to the brick factory of the former Neuengamme concentration camp.

For the “Space to Remember”, the Plattenhaus is redesigned and equipped with a printing press. A shelf is placed on the way to the house where all the printing plates are collected and accessible to the visitors. They are inscribed with the respective name of the former prisoner to whom they are dedicated. Finished posters made by descendants are displayed on billboards along the footpath between the brick factory and the Plattenhaus. They are exposed to the weather and clearly show that memory fades. In contrast, the printing plates in the shelf positioned within sight offer a permanent form of remembrance. However, this memory only becomes visible and readable through the printing process. In this respect, the printing plates are at the same time an invitation to become active and to keep the memory alive by reprinting posters.

Important Success of the Design

In August 2019, the “Studio Experimentelles Design” presented their draft to the Art Commission of the Authority for Culture and Media Hamburg. The expert panel selected the draft for the “Art in Public Space” funding programme. The project will receive a start-up funding of 17.300 € from the programme for the development and realisation of the “Space to Remember”. Further funds will be provided by Neuengamme Concentration Camp Memorial.

In November the Amicale Internationale KZ Neuengamme (AIN) have their next meeting in Hamburg. As already one year ago, the associations and working groups of survivors and their descendants from different countries, which are organized in the umbrella organization, give us the opportunity to present the state of development of the “Space to Remember”, in order to discuss together and to include their statements.

If the AIN approves the final draft, it will be time for implementation. The “Space to Remember” will then be opened in may 2020 on the occasion of the 75th anniversary of the end of the war and the liberation of the concentration camps in connection with an international memorial event on the grounds of Neuengamme Concentration Camp Memorial.

More than 50 descendants of prisoners of Neuengamme concentration camp from various countries have already signalled that they would like to create a commemorative sign for their family member.

We invite all descendants to participate through individual commemoration.

Join us, to create our own Space to Remember!

Uta is the daughter of Hermann Kühl, who survived several concentration camps as a political prisoner.

In search of my grandfather’s history, Roger Vyvey, 70 years on

THE FIRST PROJECT DAY IN CONNECTION WITH...