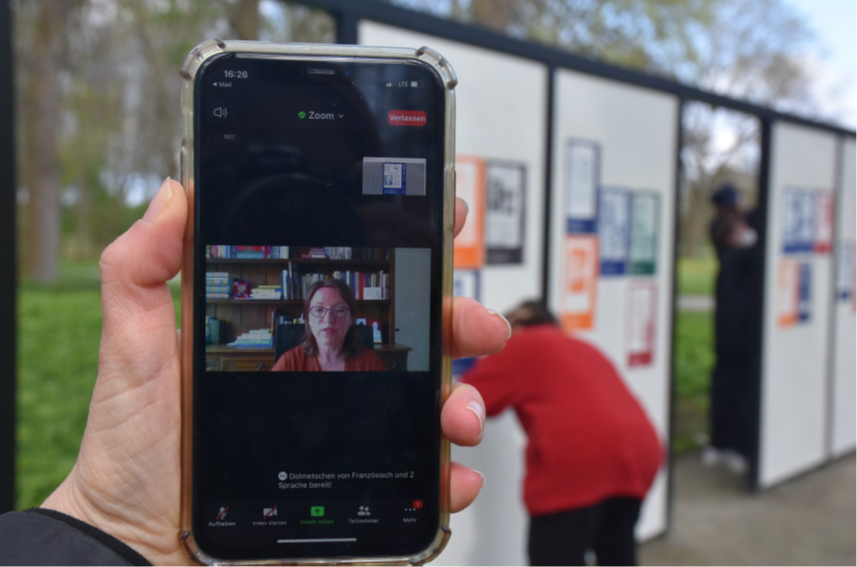 I am very grateful for the presentation of the posters for the members of our families who suffered in Neuengamme concentration camp. Each path of persecution seems to have been different, only the suffering brings them all together. I could also always sense that in my father’s words: his great respect for what his fellow prisoners had to go through.

About 50 people from different countries took part in the “Digital Placarding” at the Space to Remember on May 2nd, 2021. One day before the official commemoration of the 76th anniversary of the liberation of the concentration camps, relatives of former prisoners and interested people met online to be present when new posters were put up and presented at the Space to Remember. A recording of the event can be found here.

Like the opening of the Space to Remember in November 2020, this event had to adapt to the current Corona regulations and could only take place online. However, a connection between the real and digital world could be established by live streams to the memorial, where the helpers on site put up posters throughout the event. In her welcoming speech, Martine Letterie, President of the Amicale Internationale KZ Neuengamme, praised the initiators’ adaptability: “It is typical of the working group’s perseverance that they did not allow themselves to be discouraged by these restrictive measures.” Nevertheless, throughout the event the hope resonated that one would soon be able to meet again in person, to visit the Space to Remember in person and to see it grow.

Uta Kühl, daughter of the former concentration camp prisoner Hermann Kühl, opened the event on behalf of the working group “Space to Remember”. After a greeting by Martine Letterie, a first live stream to the Space to Remember followed. Here Bernhard Esser, son of Neuengamme survivor Rudolf Esser, initiated the placarding and introduced the helping hands on site. Among them was Jesko Fezer, who as Professor of Experimental Design at the Hamburg University of Fine Arts helped design the Space to Remember together with students. During the event, he explained the idea behind the construction of the memorial: “Placarding is part of the memorial and part of the process […]. An essential part is also the creation of the posters. Relatives remember, write texts, collect pictures […]. And this whole process is the monument. What we see here are only landmarks, aids or tools for this process. The poster-making, the printing, the placarding is the essence of this remembering […]. And this process does not stop. Posters are added and posters are designed.”

And also on this day new posters were added to the walls. The helpers took care of this while Montse Blanco Odradors, Greetje Van den Driessche and Hélène Berron presented the posters they had designed for their relatives.

Montse Blanco Obradors shared the story of her grandfather Miquel Obradors Mas from Spain. She described her family’s uncertainty about the fate of Miquel Obradors Mas after his last sign of life in 1943. It was only in 2018 that she learned of his deportation to Neuengamme concentration camp in 1944. But there, too, his trace is lost again. That is why the poster is adorned, among other things, with a map showing all known stations of Miquel Obradors Mas’ journey.

Greetje Van den Driessche told about her grandfather Urbain Van den Driessche from Belgium and expressed her gratitude that her family can honor her grandfather through the poster – “For our family it was also a way to express our feelings”. For this reason, the poster features a moving, self-composed poem that addresses the question, “Can you miss something you haven’t known?”

Finally, as another relative, Hélène Berron presented the poster about her father, Roger Cornu from France. In a moving speech, she recounted her father’s efforts to keep the promise never to forget, and to bear witness in order to honor. And of his desire to build bonds between families in mourning and the families of survivors.

Bernhard Esser spoke the closing words of the event at the Space to Remember. He presented more posters, which were placarded for the first time that day, and which in the future will hopefully be duplicated and placarded by relatives and visitors in person at the Space to Remember. Because, as Bernhard Esser summed it up, “the posters weather with time. It is up to us to keep the memory of our loved ones alive and to carry it into the next generation […]. Remembering means acting.”

After the digital placarding, interested relatives met for an exchange session, which also took place online due to the Corona pandemic. Relatives from the Netherlands, France, Spain, Belgium, Croatia and Germany exchanged views on various topics. There was also time and space to ask questions about the Space to Remember, which was seen as an enrichment in many cases. The same applied to the opportunity for exchange. The desire for further exchange meetings was expressed by the relatives. Thus, the hope remains for a reunion in the near future – at best in person at the Space to Remember.

Announcement: Commemoration of the Victims of the...

Space to Remember – a review of...

THE FIRST PROJECT DAY IN CONNECTION WITH...