The connection between the past and the present 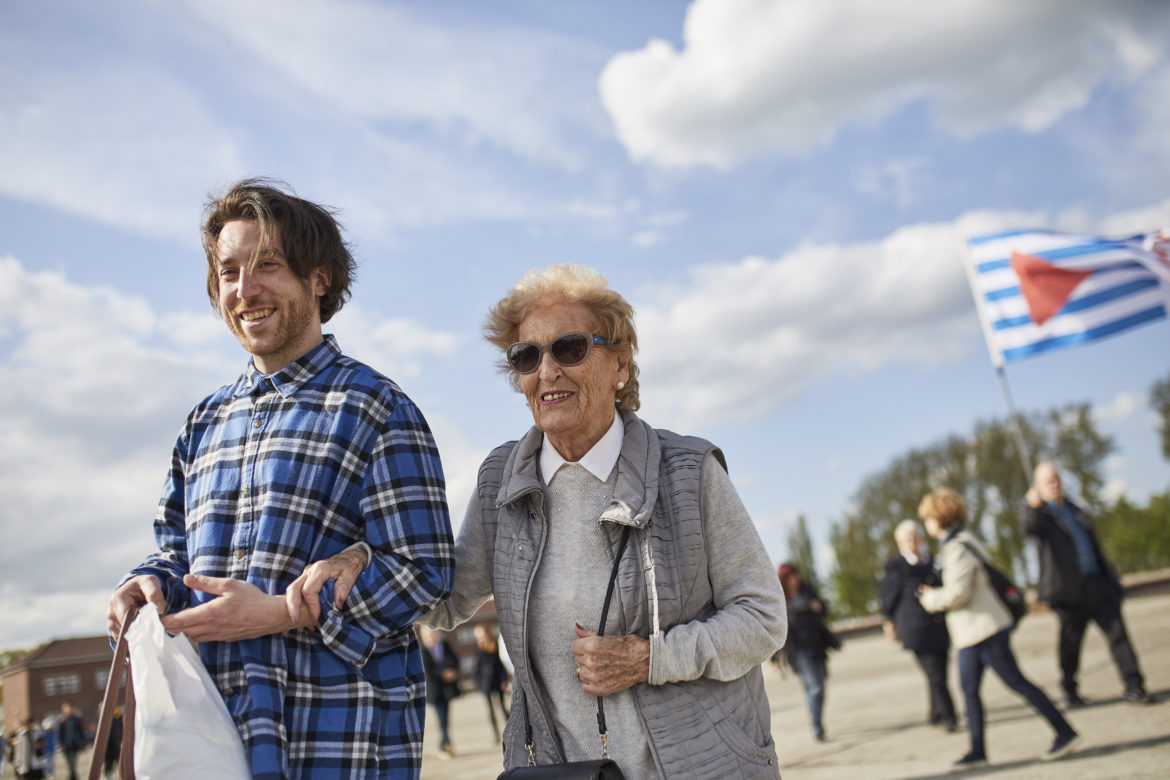 Roslyn Eldar’s mother Lili Ruttner survived the Muna Lübberstedt satellite camp of the Neuengamme Concentration Camp. After the war Lili built a new life in Australia. In May 2018 Roslyn accepted an invitation by the Neuengamme Concentration Camp Memorial to attend the commemorative services held on the 73rd anniversary of the end of the war and the liberation of the camps. This is Roslyn’s third article about the importance of visiting sites so closely connected to her family history, her new perspective on Germany and the meaning of a living remembrance culture.

When public events are filled with personal emotions

In the morning of May 3rd, 2018, my family and I, together with our friend Barbara Lorber, who had shared barracks with my mother at the Muna Lübberstedt satellite camp, and her grandsons had attended a commemorative service in Neustadt to remember the prisoners who had died in the Bay of Lübeck just shortly before British troops could liberate them. Afterward we had tried to visit the site of the Haffkrug DP camp where my family had stayed for a month before returning to their home country Czechoslowakia.

By the time the second commemorative service – this time at the Neuengamme Concentration Camp Memorial – started at 5 pm, it had already been an emotional and exhausting day for my family and the other survivors and their descendants.

The Neuengamme Cocentration Camp Memorial is set amongst beautiful German farmland. It is a haunting, sad place. This is the first concentration camp memorial I visited. I only went for the memorial service. I did not have time to “look around” and did not want to.

The second memorial service for the day was in a similar format to the first. There was a wreath laying ceremony, outside, at the site of the former “detention bunker“, the camp’s prison, which was also used for executions by the SS and the Hamburg Gestapo. It was also the site of the gassing of 448 Soviet POWs.

The Chamber choir of Altona accompanied the event. It was still sunny and warm at 5 pm – again perfect weather. Then we went inside for speeches. Various German officials spoke, including the President of Hamburg Parliament, Carola Veit, who said:

I am grateful that the ones who suffered persecution back then are telling the children of the perpetrators today what their parents and grandparents had kept a secret far too often”.

Pascal Valliccioni, a survivor of the Neuengamme concentration camp, from France, had prepared a speech that this daughter read:

I wish the tragedy of my comrades and my experiences inspires young people to stand for the values of humanism and respect towards others … I wish that the children, grandchildren and great grand -children of the victims and our tormentors stand united in the fight against barbarity. The purpose of our duty to remember is to protect the values of humanism.  The purpose is to warn, denounce and condemn any attack on human dignity”.

The Neuengamme Memorial is located just 15 kilometres south east of Hamburg’s city center. This is where Alyn Bessman works as an archivist. This is where the funding of the trip for Mindu and Barbara and their families came from. This is the Memorial that the tour guide of the city hall (“Rathaus”) was referring to. This was the main camp that had over 85 satellite camps including Muna Lübberstedt. It is one of the largest concentration camp memorial sites in Northern Germany covering almost the entire 60 hectares of the former main camp. The Memorial is dedicated to the more than 100,000 people who were imprisoned in the main camp and its satellite camps between 1938 and 1945. More than 42,000 prisoners died, almost half of all those imprisoned in this camp and its network of sub camps, which makes the death toll one of the worst of all the Nazi labour camps.

The history of the Neuengamme concentration camp

The Neuengamme main camp was established in a disused brick factory at the end of 1938 by the SS. It was not an extermination camp, rather the SS worked its prisoners to death. Many prisoners were resistance fighters. The prisoners were from 28 nationalities, mainly Russian, then Polish, French, German and Dutch. These are some of the countries listed on the Cap Arcona Memorial as almost 7000 prisoners died in the Bay of Lübeck.

This main camp was centered on the production of bricks for the creation of Hitler’s exemplary City of Hamburg. The work included the construction of a canal to and from the close by Elbe river so the bricks could be transported from the camp to the city of Hamburg. Thousands of prisoners fell victim to illness, hard labour, hunger and abuse. The SS guards were rewarded for brutality. On average most prisoners only survived 100 days. 448 Russian prisoners were gassed with Zyklon B in 1942.

On 19 April 1945, as the British were approaching Neuengamme main camp, the SS evacuated 10,000.00 prisoners that were still alive. These unfortunate prisoners were eventually loaded onto the three ships anchored in the Bay of Lübeck where most of them died on 3rd May 1945. When the British arrived to liberate Neuengamme on May 4, 1945, they were too late. The prisoners were either dead or “evacuated”.

Out of the 4500 guards only few were convicted for their crimes after the war. Only 250 were put on trial.

The survivors had to fight for the Memorial

Unbelievably, the Neuengamme Concentration Camp Memorial as my family and I got to know it is something survivors, families of victims, and their friends had to fight for. In 1948 the city of Hamburg took over the grounds of the former concentration camp from the British military government who had run Civil Internment Camp there. The city then began using it as a jail.

This was totally incompatible with the dignity of the victims of Nazi Germany and reflected Hamburg’s then inability to  admit what it had engaged in during the Nazi regime. The survivors were left alone, struggling to make it a place of Remembrance. They formed the group Amicale Internationale de Neuengamme in 1958 and applied pressure for the jails – a second one had been added in the 1960s – to be closed.

This took decades to accomplish. Finally, in May 2005, on the 60th anniversary of the end of the war and the liberation of the camps the new Memorial site was opened. Today approximately 100,000 people visit the Memorial yearly from all over Germany and the world. It is a place for remembering and learning that preserves the memory of the victims, while also providing opportunities to explore the causes and consequences of the Nazi regime.

Remembering and its importance for the future

At the end of the speeches the year 10 of the high school Gymnasium Allee presented their theatre project which included excerpts from prisoners’ testimonies and students’ families’ stories: they asked the question: “What did my family do in the Third Reich and what does that have to do with me?”

The speeches were in many languages. Again we had been given English translations.

We departed the ceremony at Neuengamme impressed by the efforts of the Memorial to bring both “sides”, victims and perpetrators, together in reconciliation, to remember and warn.  (Editor’s note: The Neuengamme Concentration Camp Memorial does not promote reconcilliation with the actual perpetrators. Rather, it offers descendants of perpetrators and bystanders the opportunity to research their relatives’ involvement with the Nazi regime and offers opportunities to meet with descendants of victims.)

I am beginning to also realize that, the victims and their children are not the only ones who carry deep psychological scars. The offspring of the perpetrators, including offspring of those German civilians who stood by indifferently, carry burdens of shame and guilt that they want to expunge. War leaves trauma for everyone.

After this ceremony I went with Mindu, her daughter Nicola Foster and her grandson Alex Foster to the hotel where we met with all the others who had been on the bus at the beginning of the day and at both Ceremonies. We all shared a final dinner hosted by the Memorial. There were some ‘thank you’ speeches. We sat around large tables eating and mixing with other international guests and young Germans keen to take up work in the “field of Remembrance”.

The general atmosphere was light and chatty. We were buoyed by the care and empathy shown towards us and impressed by the organisation and thought that went into the ceremonies and speeches but the underlying reason we were all there was not forgotten. Alyn sat next to me at dinner. When it came time to part, we said our good byes with hugs and tears.

We returned to our hotel at about 10 pm to be greeted by my son David who had flown in from London to share our private tour of Lübberstedt the next day. I was very happy to see him. It had been a long intense day, exceptionally moving and beyond our expectations. More was still to come.

The connection between the past and the present was last modified: May 29th, 2019 by Roslyn Eldar
3 May 2018commemorative serviceMindu HornickRoslyn Eldar
0 comment

Amicale Internationale Neuengamme launches Young Committee for the next generations

MY FATHER SURVIVED THREE YEARS IN A CONCENTRATION CAMP. MY GRANDMOTHER DIED in MAY 1945 IN A PSYCHIATRIC UNIT.

Announcement: Digital Placarding at the Space to...