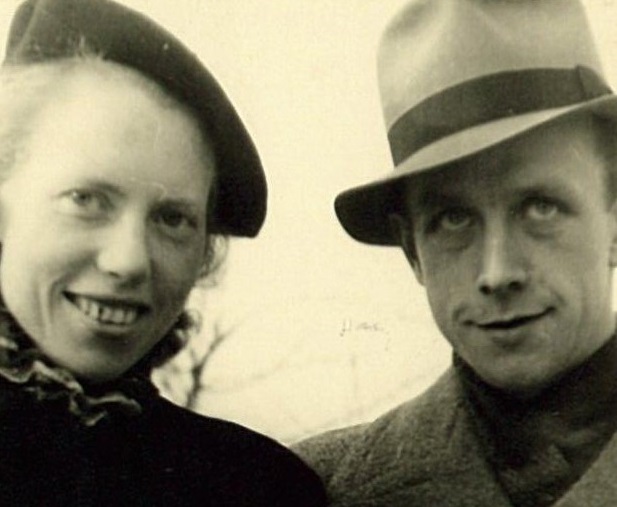 His parents, Herta and Carlheinz, already joined resistance groups against National Socialism as teenagers. Because of their political activities, they were first imprisoned already at a young age. In his article for the Reflections Blog, Daniel Rebstock reports on the impacts of the persecution on the further life of his parents as well as on himself.

I was born in September 1955 in Hamburg, as the son of the clerk Herta Rebstock, née Winzer, and the carpenter Carlheinz Rebstock. I have two brothers, born in 1948 and 1957. My sister died in 1943 after only six weeks. I am a trained book printer and worked as a journeyman for some years and later for 42 years with disabled people. Now I am a pensioner and try to look at the family history from a family perspective.

Father unfortunately passed away before the big “wave of consternation” in 1986. I use this term because it was only towards the end of the 80s that I could sense the beginning of a cautious culture of remembrance. First, the last perpetrators had to disappear. Mother was first invited to a commemoration ceremony in the Hamburg City Hall at the end of the 90s.

We drive around the corner and arrive in front of Herta Winzer’s house. She lives on the second floor at Geibelstraße 17. Oh, no, why did I ask her to manage the financial affairs of our group as cashier in the first place? She’s so young, how will she cope with what’s awaiting her? The people in the car I’m in stay seated and wait, while those in the second Mercedes get out quickly. Other SS men appear out of nowhere and surround the area. After thirty minutes or so, Herta, “my little girl”, only sixteen years old, appears between two SS men. She looks like a frightened rabbit, her face white as a sheet, when she is pushed into the second car.

Extract from the book “Gertigstraße 56” by Ruth Stender, from her father Werner Stender’s memories.

My parents were active in a youth group of the KJVD (Communist Youth Association of Germany), which later became one of the so-called “Conciliator faction“. After the first arrest they participated again in the resistance. The new group included people with different political or religious views. The first arrest was very hard for my mother. She often told me later about country girls who were imprisoned for infanticide, prostitutes and criminals against whom it was not easy to assert oneself. In an interview with my mother, I found this sentence: “She successfully undertook not to show any feelings, especially not in front of Gestapo officers.”

The significance of this for my later life I only understood much later. Mother spent almost four years in prison altogether. There are two stories that made me understand her courage. My mother’s older brother was arrested even before her and spent 11.5 years in jail. She loved her brother more than anything. And she actually managed to visit him once in the Sachsenhausen concentration camp and to get out of there safe and sound. The other story she told me was about her work for the Reich Labor Service (“Reichsarbeitsdienst”), which she had to attend in Weimar. There she climbed up the Ettersberg at night, up to the outer border of the Buchenwald concentration camp, in order to “scout”.

Very early on he [Editor’s note: Kurt van der Walde] met two people who became very important to him: Rudi Mokry and Carlheinz Rebstock. He told about how grateful he was for the advice that Carlheinz gave him in the concentration camp. Because he had already been to an interrogation and had experienced the interrogation techniques. He said: “Don’t listen to what the SS says! Run straight up the stairs! Stand up straight against the wall with your hands on your pants seam!” [Author’s note: In the hope to impress with discipline.]

From the memories of Kurt van der Walde, written down by his daughter Norma.

My father spent a short time in the Fuhlsbüttel concentration camp, but most of his nearly six years of imprisonment were spent in the Hahnöfersand juvenile detention centre. After his imprisonment he was drafted into the “Strafbataillon 999“. He later told me that they were disarmed, but locked up in uniform in Buchenwald concentration camp. Seven months before the end of the war the situation was probably already so muddled that the “999s” were released from Buchenwald after a few days. Mother told us again and again that father did not get out of bed for days and that he was unable to talk about the things he had seen in Buchenwald.

After the detention period

In 1943 the first child of my parents, our sister Susanne, was born. Susanne was born with a severe disability and died after only 6 weeks. After the end of the Nazi terror, the formerly persecuted were looking for recognition and help. Wherever they were looking for help, they often met their former tormentors, who had made themselves comfortable again in authorities and offices. After 1945, Mother even met the Gestapo official who had arrested her again on the streets. Applications for a cure or a pension were rejected for many formerly persecuted persons, often with identically formulated texts.

The Cold War began and with it, another new kind of persecution for communists. Detention and loss of employment were connected with it. The former tormentors were back in charge everywhere.

In 1956, after Stalin’s death, the 20th Congress of the CPSU in the USSR followed with the uncovering of Stalin’s crimes. But my parents’ hopes for a debate and further democratization in their party were shattered. They were now also cut and thrown out of the party by the people for whom and with whom they spent years in prison for their collective ideas.

Father graduated from night school as a construction engineer and achieved some prosperity and prestige as an architect in the 1960s. But even during this work, his previous life stood in his way. Due to his political past he did not receive a visa for the USA, which was necessary for him professionally. When unfair practices increased in the construction industry and this was also expected of him, he gave up his well-paid job and went into self-employment, with full personal risk.

The impacts of persecution

A memory of my parents is always present in my mind: the inability to “normality” in everyday life. When I made fun of why they communicated so little with neighbours or people on the street, they always said: “We don’t know what they did back then”. Almost exclusively formerly persecuted people came to visit us at home. It was clear to me already as a child, not to talk about the fate of the parents outside the parental home. We took over the conspiratorial, so to speak. The discipline of the parents, not to show any feelings towards the Gestapo, for example, obviously also did something with us children. Showing emotions and talking about feelings was never easy. It took me a lot of effort and work to understand what kind of package I was carrying around with me.

Mother dealt especially with the psychological effects of her imprisonment very early on. It was also clear to her soon, that the trauma she had suffered could be passed on throughout the generations. She provided herself and us with appropriate literature and began to seek therapeutic help as early as in the 1960s. Father turned everything inwards for a long time. Unfortunately, it took him a very long time to recognize the possibility of receiving appropriate help.

My parents were always politically thinking and acting. They observed the Prague Spring full of hope, only to experience another relapse into dictatorship and violence. In the 1970s, my father worked closely together with Spanish immigrants who had fled from Franco fascism.

Mother and father are buried in Hamburg on the honorary grounds of the Geschwister Scholl Foundation (Scholl siblings Foundation). With them, many who came to visit us in the past.

The history of my parents during National Socialism and the impact on myself was last modified: November 17th, 2020 by Daniel Rebstock
BuchenwaldDaniel RebstockFuhlsbüttelKZ BuchenwaldPersonal StoriesSachsenhausen
0 comment

The Space to Remember is taking shape...