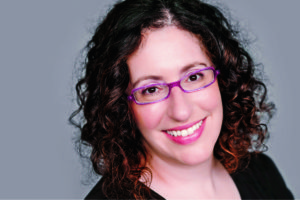 When I had finished „Days of Awe“ I was happy and sad at the same time. Happy, because Lauren Fox had written a realistic ending to the story of Izzy, daughter of a Holocaust survivor, whose world is turned upside down when the loss of both her best friend and her husband leave disenchanted with middle-aged life. Sad, because I wanted to know more, especially about where Lauren Fox had found the courage to create a protagonist whose family’s experience of persecution plays a role in her life without being the only thing that defines her.

Fortunately, Lauren Fox  agreed to answer some questions I had emailed her.

What made you decide to weave the theme of the relationship between a survivor and her daughter into a story about female friendship, disintegrating and new romantic relationships?

One of the pleasures of being a fiction writer is that I get to explore my ideas, obsessions, questions, concerns and passions and turn them into what I hope will ultimately be a cohesive and complex story. I write realistic fiction, and nobody’s life is made up of one single issue and nothing else; our lives are complicated by so many swirling, overlapping, sometimes opposing themes. So that’s why Izzy, my protagonist, faces the grief over her friend’s death along with her disintegrating marriage, changing relationship with her daughter, new spark with someone, and loving but messy connection with her mother. It’s all part of the same package, and my hope is that each piece enriches the other.

In an article in the New York Times you wrote about finding your great-grandmother’s letter and the crucial influence this discovery has had on you. Reading that article one could expect that your family’s history would appear in a less subtle manner in your fictional writing. What made you choose this approach?

Over the years, I’ve considered writing a novel in which the themes of the Holocaust and survival play more bluntly into the narrative, but that approach has never felt quite right to me. I suspect that our generation – children and grandchildren of survivors and Jewish emigrants – feels this history differently from the generations that preceded us; for Izzy, it’s a thread woven into a larger quilt.

In “Day of Awe” Izzie recalls her mother’s reaction to the Gemütliche Bierhaus in the following sentence: „[W]henever Helene drove past it, she would shudder and say something like ‚Later, after zese beers, ve vill burn down ze synagogue.‘ Frequenting it as an adult made me feel brave and ordinary.” Why did you find it important to characterize Izzie as somebody who does not consider herself to be “ordinary”?

Well, I try not to talk too much about how personal this novel is, and how much of my personal history plays into it, but I will say that Helene and my mother share this experience; both were children when they left Germany with their immediate families, and both lost many family members who stayed behind. So my back story for Izzy is personal, too – she grew up feeling the burden of this difficult history, and so, for her, the definition of “ordinary” is someone who is light and airy, who doesn’t feel a sense of impending doom around the corner. I think that this history makes us empathetic and sensitive to the pain of the world, but it also makes us unusually fearful and attuned to danger – out of the ordinary in that way. It would be a treat for her to feel ordinary, but she knows it’s impossible.

In “Every Breath Amazing” you mention taking your daughters with you on the trip to Germany. How do you pass on your family’s story to them? Do they take any interest in it?

My daughters are twelve and eight, so the older one can handle some of this, and the younger one isn’t really old enough. So that was one of the challenges of being in Germany with them – how to be sensitive to their curiosity but also to their different levels of emotional sophistication. I explained things to them as simply and straightforwardly as I could, and I answered their questions if they had them, but I didn’t push it too far. My older daughter especially was definitely interested. As we traveled around Germany, I made sure that we stopped at every Stumbling Stone we saw and paid attention to the names engraved on them; that respect and repetition, I think, was important to all of us.

What is your advice for other descendants of survivors on how to write about their family’s experience of persecution?

I tell aspiring writers to write their passions, or to write to try to answer the big questions that motivate them. So for me, discovering my great-grandmother’s letters became an encompassing and motivating question. But as for how to actually write about this subject, it’s necessarily different for everyone; I think my only advice would be to do as much research as you can, because, whether you’re writing fiction or non-fiction, truth and accuracy of representation are paramount, and are the best defenses against both forgetting and denial.

What are your ideas for a future of remembrance?

I don’t know much about remembrance as a field of study – maybe because it seems to be in such competent hands. I’ve largely concerned myself with writing fiction – where, as I’ve discussed, these themes are more embedded than obvious. But hopefully one common element of a future of remembrance is to work against xenophobia and injustice. There is no better way to honor this history than by trying to prevent it from happening again.