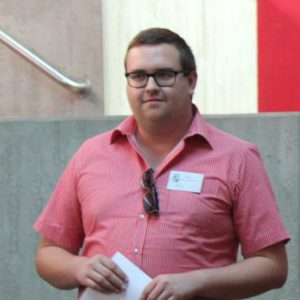 Now we see the bigger context.”

I am a student of memorial culture, with a focus on how Germany and Russia deal with their past. I have visited many memorials of former concentration and extermination camps in Germany and Poland.  I visited the Russian Museum of the Great Patriotic War. I have talked to different survivors. During my researches I have faced different challenges and questioned myself: How remembering will change over the next few years? Who will tell the stories when eyewitnesses are gone? What can be done to transfer and tell the story in more objective ways? I found the answer to some of my question when I met Tom Devos.

I got to know Tom during the film project “Which movie is playing now?” organized the by Neuengamme Concentration Camp Memorial. Tom is a good friend of the memorial and a member of the organization N.C.P.G.R. Meensel-Kiezegem’44. Together they shed light on the history of ‚punitive‘ actions committed by Nazi against the villages Meensel and Kiezegem in 1944. Tom’s great-grandfather was among the people who were taken to the Neuengamme Concentration Camp. Tom’s current focus is on developing a new memorial in Meensel-Kiezegem. From August 7 till August 13 the ‘Herdenkingsweek’ (Rememberance Week) took place in Meensel-Kiezegem. Five film project participants and one facilitator joined Tom and the organization’s helpers for this week of remembrance. In planning the week Tom and his team were looking for a way how the history of Meensel-Kiezegem can be commemorated in the future, what would be interesting for people and what they would like to know about the history of Meensel-Kiezegem.  I would like to share with you my exciting conversation with Tom Devos about these questions.

“We see wars everywhere around the world. We have to work on making sure that people do not commit the same mistakes again”.

Since the establishment of the Stichting Meensel-Kiezegem ’44 it has changed a lot. It has merged with the N.C.P.G.R. (National Organization for Political Prisoners and their descendants). Originally, the first memorial in Meensel-Kiezegem was established in 1946. At first it was run by survivors and widows. Only eight out of 71 had returned from Germany after the raids. In the beginning also initiative came from a school teacher who had published a book and sent children with postcards to the widows.  But the second and third generations needed something new. For example, Oktaaf Duerinckx, the son of a victim, published a book with interviews in 1988. In 1994 the movie about the history was done. In the early years the main focus was on collecting historical materials about survivors of the Neuengamme camp. They did interviews with survivors and kept in touch with widows of those who were killed in the Neuengamme camp.  For more than 20 years they managed such a big organization.

“We see the need for traditions”.

When we arrived in Meensel-Kiezegem I did not expect what I saw. We wanted to visit the remembrance week organized by the local ‘small’ organization NCPGR Meensel-Kiezegem’44.  This organization receives very little support from the Belgian governmen, It mostly exists thanks to the enthusiasm of locals, especially descendanst of those taken to the Neuengamme Concentration Camp in 1944. Upon arrival we entered into a huge pavilion which was decorated and equipped with big stages and TV screens. To this event many officials were invited. The day of commemoration on August 7 consisted of four parts: a religious service, official speeches, putting down wreaths next to the cemetery and finally tea and coffee for the guests.

Actually, I think, the first shocking moment during the commemoration day for me was the following thing: I did not expect the strong influence of religion on a secular commemorative event. It was quite interesting to see how people were involved and there was no controversy about combining secular and religious parts.  In Russian memory culture the spiritual part of commemoration consists of one minute of silence to remember those who died and putting flowers on the graves. In Meensel-KIezegem year after year the organization repeats the same rituals. The only thing that changes is that the big commemoration takes place one year in Meensel and the next year in Kiezegem. This has been going on since the beginnings in 1946. I appreciate this because they do respect all generations in their way of remembering. But even in Meensel-Kiezegem things are changing.

“You have to go digital.”

When I was talking to Tom for the first time during our movie project I became really inspired by his ideas. He put such a big effort on developing memory culture. Actually he is himself an example of what people can do without big support from government, just with the help of friends. I wanted to know what would be his  ‘ideal way of  dealing with history’ or at least his plans for the future: “You can’t solve the problem unless you take away the cause. 23 years old blow themselves up at the airport. People are saying they are ‘terrorists’. I want to know how they became terrorists …  That’s the crucial information. ”

Next to a huge respect for the victims and their descendants Tom sees the necessity to involve young generations into the commemoration work. The digital platform is the way how they can make young people be interested in the history of Meensel-Kiezegem. “They no longer go to the library to read, they watch Youtube, they no longer only go to cafés and bars, but also talk to each other on facebook”. Digital space can be a way to catch new audiences. In addition, young people can have a more objective perspective and distance from which they look at what happened. The reason is that they don’t have such strong personal connection to what happened. I have heard this idea quite often. I think ‚distance’ can be an interesting way to reach the perpetrators’ side.

“For the ‚victims‘ collaborators are evil.”

A not so well-documented part of Meensel-Kiezegem history is the history of collaborators in Meensel-Kiezegem. There were people who supported the Nazis and took part in crimes against neighbors and friends. This topic is still a bit taboo. It’s hard for victims and their close descendants to keep the distance from emotions and discuss the problem even with descendants of collaborators.  That’s why Tom hopes to bring young people together and create a dialogue among them on the topic.  ‚When our older generation start talking about the past, still hands start shaking’, Tom explained. While in Germany it has become easier for descendants’ of perpetrators to come forward and talk about the effects their relatives’ actions have had on their lives, this is not yet possible in Meensel-Kiezegem. They will at least need another 20 years to reach the point where Germany is at today, Tom thinks.

The memory culture in Germany is quite well developed by now. Also thanks government support. But there is another side of the coin: memorial sites become the instrument of politics. How can we find a balance between memorials being manipulated by politicians and them still getting support from them? There are a lot of cases in which memorial sites became an arena for battles between conservatives and liberals in Russia, for instance. So the former museum of the history of GULAG in Russia was turned into museum of punishment system in Soviet Union and which noble role they have played in soviet industrialization process. Thus justifying the totalitarian way of political issue and methods of circulation with political opposition and so called dissidents.

“We wanted to bring together different perspectives on the story, just bringing them together but keeping their uniqueness”

The most important event of the remembrance week was the opening of the future new exhibition. Today, the memorials ran by NCPGR Meensel-Kiezegem’44 is located in two small former administrative buildings.  In a few years they would like to extend the exhibition and are now looking for new forms of remembrance with a focus on what would interest the public and how it should be represented.

Exhibition on situation in the camps. © Franciska Henning, 2016.

The popup exposition during the remembrance week consisted of three parts.  The first part was a private collection of Albert Hendrickxs showing the weapons and war trophies from the British army. For locals they seem to be a symbol of liberation. The next part is the pictures by school children. They were done during school projects when the pupils of the 6th grade worked on the topic. Then the Neuengamme Concentration Camp Memorial exhibition about those who were deported to Neuengamme Concentration Camp from Meensel-Kiezegem. And the historical and contemporary pictures, among them a model showing the reconstructed conditions of concentration camp barracks. And the huge part dedicated to the works of Linda Van der Meeren, a local artist who is also a descendant of a Nazi victim. She had created a set of paintings about the Meensel-Kiezegem story.

There were a lot of moments in which things were not quite clear to me or that I did not like. But I really liked the way how things were sdisplayed in the exhibition, or at least how Tom  explained things to me.

First of all I criticized the way in which they displayed the weapons because they cannot be symbols of pacifism. But for many locals, especially for survivors, they became a symbol of liberation. In addition,  I did no like the reconstructed concentration camp barracks’ interiors and the soldiers’ uniforms. Displaying these things is not typical for German memorials, for instance. Howeve, I think it is just a question of different ways of commemoration and, as Tom explained, having been “on the winning side.“

Despite this criticism I think the way of commemorating in Meensel-Kiezegem is the best I have ever encountered. The most amazing thing is that the organization is run by local families and friends. They all have been affected by the 1944 raids. Those people focus all their energy on shedding light on the story. I am sure it was hard to always be reminded of the people who did not come back, like in Tom’s family. In addition, it’s amazing they contributed 90 percent of the budget. They raised the funds by publishing  research material and media work, and worked together with local companies for additional support and setup a lot of private fundraisers. I have never heard that an organization can raise so many funds this way. It shows the good quality of the organization’s work and people’s interest in the topic.

‘We are a little bit crazy’

Ultimately, it is amazing how they inspire others. The six of us from Hamburg enjoyed being there, sharing memories and getting to know these unbelievable kind, smart and warm people from Meensel-Kiezegem.

Film project participants pay their respects by laying down a wreath on August 7, 2016. © Franciska Henning

How shall we proceed after the Forum “Future of Remembrance” 2016?

You are not alone!

Ideas for making the names of survivors...

How shall we proceed after the Forum...