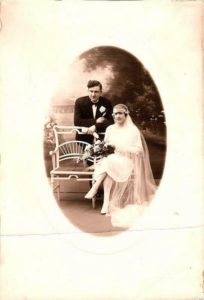 Interview with Damien Bertrand, great-grandson of Edmond Forboteaux who died on May 3rd, 1945.

1 How did you learn about what happened to your grand-father?

In my family, people hardly spoke about my great-grandfather’s concentration camp experience probably because his death in May 1945, shortly before the liberation by the British troops, led to a major rupture among the members of our family. Indeed, the loss of my great-grandfather (the French administration officially declared him missing in 1947) left his wife alone, without any viable financial mean, along with three young children of 11, 9 and 6, a situation that encouraged my great-grandmother to sell the house they used to live in and then to remarry somebody else. Moreover, this heavy weight was made worse by the conviction my great grandfather’s wife, children, parents, sister and his surviving camps comrades had of him being too clever and crafty to have been murdered by the Nazis : to their mind, he had undoubtedly started a new life in the post-war Germany !

Of course, through the years, each child of the family got married and had children on his own who got to know they had a grandfather who fought against the Germans during WWII and perished in the camps but each attempt they ever made to understand more about this story ended in a cold, reluctant and suspicious reaction of their grandmother who always refused to bring those memories to mind.

As far as I am concerned, I became aware of what had happened to my great-grandfather when I was four or five years old while I was staying every Wednesday at my grandparents‘ house. I don’t remember at all how the subject came up in the conversations I had with my granddad with whom I was very close. All I can say is that he probably felt this was the occasion to talk about the camps and this kind of things. Did I understand at that point what it really meant? Absolutely not. Nevertheless, I had in mind that my great-grandfather had done something really important for his country and that he had perished during the war, killed by the Germans – I insist on ‘Germans’ because my grandfather never made a distinction between Nazis and German people.

2 How did you manage (or not) to overcome the consequences of the Nazi crimes?

My grandfather, I think, never completely overcame the consequences of the Nazis’ deeds and I am still able to remember him saying he would never shake hands with a German and that no German would ever cross the doorstep of his house. As a young child, I shared his rejection of German people.

However, growing up and studying helped me improve my opinions on this specific topic and made me feel more open-minded. I can surely state today that as a student in European Affairs at Sciences Po, having deep links with university lecturers from Germany, I find the friendship and cooperation of our two nations as an evidence of a European Union built on good will from both countries.

Carmen Forboteaux and her children. © Private archives of Damien Bertrand.

A particular light has also to be cast on the question of forgiveness. I am the great-grandson of a man who died in a concentration camp, but does this give me the legitimacy of pointing out who should feel guilty or not for something their parents or grandparents did ? If there were people to ask for forgiveness or not, they were my great-grandmother and her sons who did not live long enough to do so. I am part of the fourth generation, a generation which grew up in the European Union, who German acquaintances, who travels to Germany, which is at the heart of the Erasmus program. I personally am fairly fond of German literature, music and culture. In 2010, during a return journey to the Neuengamme Concentration Camp Memorial at the occasion of the 65th anniversary of the liberation, I also saw what German youth is like nowadays and that it has been deeply involved in keeping alive the memory of the camps since the 1970s.

Eventually, being part of the fourth generation helped me put the trauma into perspective because only one person of my family was deported and perished in the camps and this person was a resistance fighter who knew why the Nazis sent him there. This was not the case for Jewish families who were killed just because they were born this way and I think the trauma is still more perennial among Jewish families.

3 What will you pass on to your children?

I will, of course, teach them the story of our family through the war. This story will, I think, be a conveyor of the necessity to get involved, to be open-minded, to accept people for who they are because everybody has something to offer, to respect people in order to be respected in return, to act with conscience using their reason, to fight against bigotry, hatred, intolerance, xenophobia, totalitarian doctrines, indoctrination.

4 What do you expect, or fear, from a dialogue between families of victims and families of perpetrators?

I have no particular fear of a dialogue between families of victims and families of perpetrators. I simply want to invite people to watch watching two important movies who can explain the subject better than I : Marceline Loridan-Ivens’ excellent La Petite prairie aux bouleauxand James Moll’s Inheritance.

The 4th generation is ready for reconciliation was last modified: November 4th, 2017 by Yvonne Cossu-Alba
0 comment