Book review “Expansion at all costs” 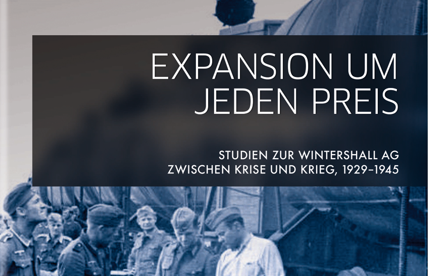 In 2017, the Hannoverscher Bahnhof memorial was opened in Hamburg. It commemorates the deportations of Jews and Sinti and Roma that took place from this train station between 1940 and 1945. An accompanying documentation centre was to be opened in 2020. So far, this has not happened. The investment company that owns the building has leased another part of the building to the gas producer Wintershall Dea, a merger of the companies Wintershall and Dea, both of which have a national-socialist past.

The victims’ associations and their relatives were opposed. They argued that the sale of the property violated the conditions imposed by the city of Hamburg. They said that the Documentation Centre Hannoverscher Bahnhof should not share the building with tenants whose history conflicts with that of the Documentation Centre. The various parties had discussions and finally the owner of the building offered to establish an independent documentation centre. The opening is planned for 2026.

In light of these events, it is interesting to read Expansion at all costs. The book contains three articles highlighting the history of the German Wintershall AG, one of the two merger parties of Wintershall Dea, from 1929 to 1945. The book was commissioned by the current management of the company. Much too late, because the book was not published until 2020. But better late than never certainly applies here.

The first article describes the economic history of the company, which began as a potash company. Potash is a combination of salts consisting mainly of potassium carbonate. It is used, among other things, as an ingredient for artificial fertiliser. In the early 1930s, Wintershall was the market leader with a 41% share of the German potash industry. Initially, good money could be earned with it. The state authority Reichsnährstand, which regulated food production in Germany, wanted to make the country independent of food imports. Artificial fertiliser was to be the solution. Whenever potash prices increased, the government intervened. From then on, it was difficult for the potash industry to make a profit. Wintershall realigned itself and managed to take an important position as a German petroleum company. Production was mainly geared to the wishes of the war industry and was mainly carried out by forced labourers during the war.

The second article describes how the company’s management became intertwined with the Nazi regime and how August Rosterg, the company’s general manager, supported the Nazi party from an early stage. He used political developments to the company’s advantage. He saw democracy and co-determination as a threat to the freedom of his company. Rosterg was one of the first members of the Freundeskreis der Wirtschaft, a circle founded by Hitler’s economic advisor Wilhelm Keppler to strengthen relations between industry, business and the NSDAP. Rosterg continued to attend meetings when Himmler took over the leadership and changed the name to Freundeskreis des Reichsführers SS. In 1932 Rosterg also signed the petition to Hindenburg to make Hitler Reich Chancellor. Rosterg was not a party member, but his close ties to the Third Reich are more than evident.

The third article deals with the working conditions and explains the workers’ attachment to the company, which Rosterg runs like a strict but just father, by means of a beautifully depicted popular and company community. Through an internal magazine, workers are told what to think, and the direction is clearly political. Trade union representatives are no longer welcome. In 1933, new mediators are appointed between the workforce and the management, whose main task was to keep internal peace in the company. For example, collective agreements were no longer negotiated with them. Daily life in the factories also became increasingly interwoven with the regime. With the start of the war in 1939, conditions worsened, working days became longer and a system of fines was introduced. As the war progressed, production increasingly passed into the hands of forced labourers.

I find this article the weakest in the book. The author struggles with the fact that the situation was different at each site, but this does not change the fact that Wintershall used almost 10,000 forced labourers, including concentration camp prisoners. The authors themselves point out in the introduction that this book is only a first step and that there is still much to be researched. Nevertheless, it is good that this book exists and good that Wintershall has taken this step to come to terms with its own past.

Diamond Children – A Book and an Exhibition

Hans Maršálek-Prize 2022: Award for the Space to Remember

Diamond Children – A Book and an...