The first version of the blog, launched in 2015 by Swenja Granzow-Rauwald 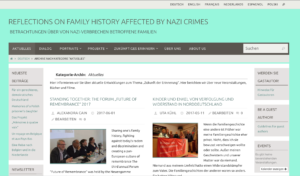 The first version of the blog, launched in 2015 by Swenja Granzow-Rauwald was last modified: November 5th, 2017 by Tom Devos
0 comment

Tom Devos is a young entrepreneur and coordinator of the research centre of N.C.P.G.R. Meensel-Kiezegem ’44. During WWII his great-grandfather died in the Neuengamme Concentration Camp after having been deported from Meensel-Kiezegem. Tom is already the 4th generation putting effort in the remembrance of the victims of the Nazi-regime in Meensel-Kiezegem.